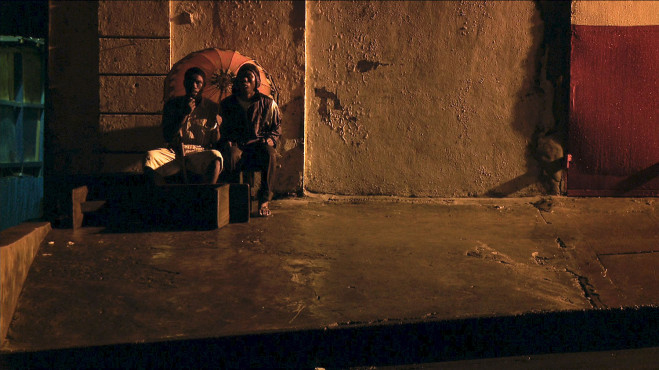 This documentary is well-produced in an artistic way with the “zombie parade” as its pictorial centerpiece. Visually the film is very inspiring. But as the visual is taken to the fore the content suffers. Little effort is given to contextualize the space and lives of the main characters. I have for several years lived in Freetown and only because I know their hangout can I locate them. Furthermore only because I have done research among other street dwellers in Freetown can I contextualize their lives. To an outsider their lives must appear utterly incomprehensible and although the audience will be moved and feel pity for them their stories will remain in darkness.

Solidarity and conflict amongst the group figure in the film, just as relationships and even love, but it is very much on the surface. Survival themes do not really feature although it is the overarching one in their lives. Filming in the dark gives the image that this group lives in isolation from other people. Although handicapped begging youth are not at the center of society, Sierra Leoneans are far from shunning them. In the film contacts with non-handicapped people are limited to a telephone call done by a blind boy to a relative, a discussion with a prostitute who is afraid of the blind boy and abstract discussions amongst themselves about tentative relations with non-handicapped people. Little more is picked up. A street fight started by a drunken jealous boy in a wheelchair is only adding to the theme of tragedy. And there are recurring shots with blinds leading blinds over abyss-like potholes in the Freetonian streets. In a long tedious scene we follow a boy on crutches up steep stairs to his room. Indeed it is arduous work for him, but the scene signals that he and the other handicapped youth are all alone in their struggle. The darkness and the absence of others strengthen this image.

Daytime filming combined with a broader social context and understanding would have contributed to a rather different gaze because most Sierra Leoneans, rich or poor, and despite their limited means, do engage and help people who exist under hard conditions – including handicapped people, even though they may be ex-combatants. In the absence of the cameraman the boy on crutches would have been aided up the stairs and the blind boys would not have walked alone over the potholed streets. These are the constructs of cameraman and director.

This text was written for Africa is a country and appeared there on January 29, 2014.

« Rejoinder to Utas on the emerging Liberian middle class, by Ilmari Käihkö Fourah Bay College: The Decline of Sierra Leone’s “Oxford in the Bush”, by Tom Gardner »