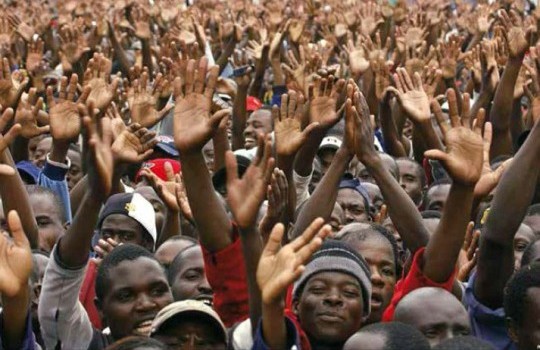 Pamberi ne Zanu! is the chant of the Zanu PF supporters as they celebrate their victory over the MDC. The results in the Presidential race: President Mugabe, 61% against Prime Minister Tsvangirai’s 34%. In parliament Zanu PF won 158 seats to the MDC’s 51. Despite the scale of victory, there were no spontaneous celebrations and a sombre mood has gripped the country as both Zanu PF and MDC-T supporters have become anxious. The debate about the freeness and fairness of this election has taken on a familiar pattern from 2008 where SADC and the AU implicitly support Zanu PF and endorse the elections, while the UK, USA, Australia, Canada and Botswana question its legitimacy in support of the MDC. The MDC is currently preparing a dossier on electoral irregularities which supposedly helped rig the elections in favour of Zanu PF. The election saga is sure to continue for a few more weeks as the MDC is certain to contest the elections through the courts. However, it is highly unlikely that these elections will be re-run and it is with almost all certainty that Zanu PF will form the next government.

Surprisingly, amidst all the excitement about the election results and allegations of vote rigging, ordinary Zimbabweans have returned to their normal daily chores for survival as if this election dispute has no bearing what-so-ever on their lives. Simeon Mawanza of Amnesty International explained to me that, “Maybe the excitement about the election results is the preoccupation of political analysts, but it is not for the majority of the people in Zimbabwe who understand that these elections will not dramatically change their living standards and increase their freedoms overnight. It is everyone’s hope that all the human rights enshrined in the new constitution will be respected and protected in the next five years.” So, for most people in Zimbabwe, the most important question is not who takes over government, but how do we go forward from here?

Before the elections, it was clear that Zimbabweans wanted two things: 1) an end to the Government of National Unity (GNU), which they found to be ineffective; and 2 an end to the decade long crisis. “The GNU brought relative stability but no growth in the economy as the two parties spent much time bickering with each other. It left us in a stalemate. So people want one party in power (either MDC or Zanu PF) that they can hold accountable.” Dr. Zawanda of the Zimbabwe Electoral Support Network (ZESN) explained to me. Thus, a single Zanu PF government will satisfy the first wish of the people of Zimbabwe.

Regarding the second issue, ending the crisis, the aspects the people of Zimbabwe are concerned with are embodied in the Global Political Agreement (GPA) of 2008 and were supposed to be dealt with by the GNU over the last four years. These relate to the political and civil rights of Zimbabweans to hold diverse political opinions and views; freedom for political parties to exist; freedom of association; and respect for their human rights, among other things. However, their concerns are not limited to these political and civil rights, but include their social and economic rights such as an enhancement in their living standards; access to jobs; housing; decent education for their children; access to decent health facilities and the general right to develop. Will this second wish of the Zimbabwean people be granted them?

With Zanu PF’s strong majority in parliament, constitutional amendments are certain to be made in order to strengthen their position of power. As a matter of fact, on Friday – two days after the election – Justice Minister, Patrick Chinamasa, stated that Zanu PF will make some constitutional amendments. This is to a constitution that is not even three months old! This is also a constitution that was popularly voted for via a national referendum in March this very year. If Zanu PF are now already wanting to make amendments to this constitution then the question is: what was the point of going through the whole process of drafting the constitution – a process that took four years and cost over USD 75 million – if it is then torn up within less than three months of it being accepted?

In fact, the GNU was set up to address seven key issues of the political and economic crisis in Zimbabwe: 1). Constitutional Reform; 2). Institutional and Legislative Reform; 3). Human Rights and Operating Environment; 4). Transitional Justice and National Healing; 5). Media Reform and Freedom of Expression; 6). Humanitarian and Food Assistance; and 7). Economic Recovery, which all cover the political, civil, social and economic rights mentioned above. Of these reforms, only the drafting of the constitution has been completed. The new constitution has not been fully implemented and both parties suggested that the next government would implement it in full. However, if Zanu PF’s approach to the constitution post-election 2013 is anything to go by, then it is highly unlikely that this new constitution will be implemented or that the other six outstanding reforms will be carried out within this mandate period. There is a general feeling among several interviewees I have spoken to since the elections that Zanu PF does not really care about making these reforms and is instead interested in exploiting the country for their personal enrichment. It is a harsh accusation, but one that repeatedly comes up.

With the MDC-T vanquished (freely and fairly or not) to no more than a one-third minority in parliament, any serious checks and balances that the new constitution provides for through parliament, will be ineffective. It also means that there will be very little democratic debate and dialogue, and as such, Zimbabwe loses the gains it made in this area over the last four years. While a combination of election irregularities, Zanu PF’s resurrection and the MDC losing a chuck of the protest votes that propelled it in the 2008 elections created this situation, it was further aided by MDC-N and Zapu’s ambition to strategically position themselves as “King Makers” in these elections. A strategy that catastrophically backfired, weakening all the opposition parties in parliament and handing Zanu PF a two-thirds majority to rule virtually unrestricted in this new five year mandate period.

This new mandate period will see the space somewhat opening up for Zimbabwe as  some sanctions are removed and access to international trade and finance is improved, which should allow the country to take some steps towards its economic recovery. However, the new government must also use this space to seriously consider these fundamental political, civil, social and economic issues that are affecting the people of Zimbabwe and take steps to address them in the next five years. That would be the way forward. A failure to do so now, will simply reproduce this crisis a little further down the line.

So yes, the calling chant is “Pamberi ne Zanu!” But if these reforms are not carried out in favour of personal enrichment, then the response chant might as well be “Pasi ne Zimbabwe!”

Eldridge Adolfo is researcher at the Nordic Africa Institute

« Anatomy of a feeble analysis: a critical reading of Crisis Group’s latest report on the DR Congo by Judith Verweijen Media Myopia and the Image of Africa, by Paul Stoller »