Things are never going to be the same again? Burkina Faso after the brush-up, by Cristiano Lanzano

Plus rien ne sera comme avant (things are never going to be the same again)! The slogan cried by protesters in the streets of Ouagadougou and other cities of Burkina Faso last October, right before the fall of Blaise Compaoré’s regime, appeared here and there in casual conversations – but this time, colored with irony. A power blackout lasting longer than usual, a workers’ strike stopping the distribution of beer all around the country, the new academic year starting with a few months delay: all everyday events and problems could become an opportunity to reflect, joke or complain on what the transitional government (leading the country until new elections scheduled for next October) had, or had not, accomplished. 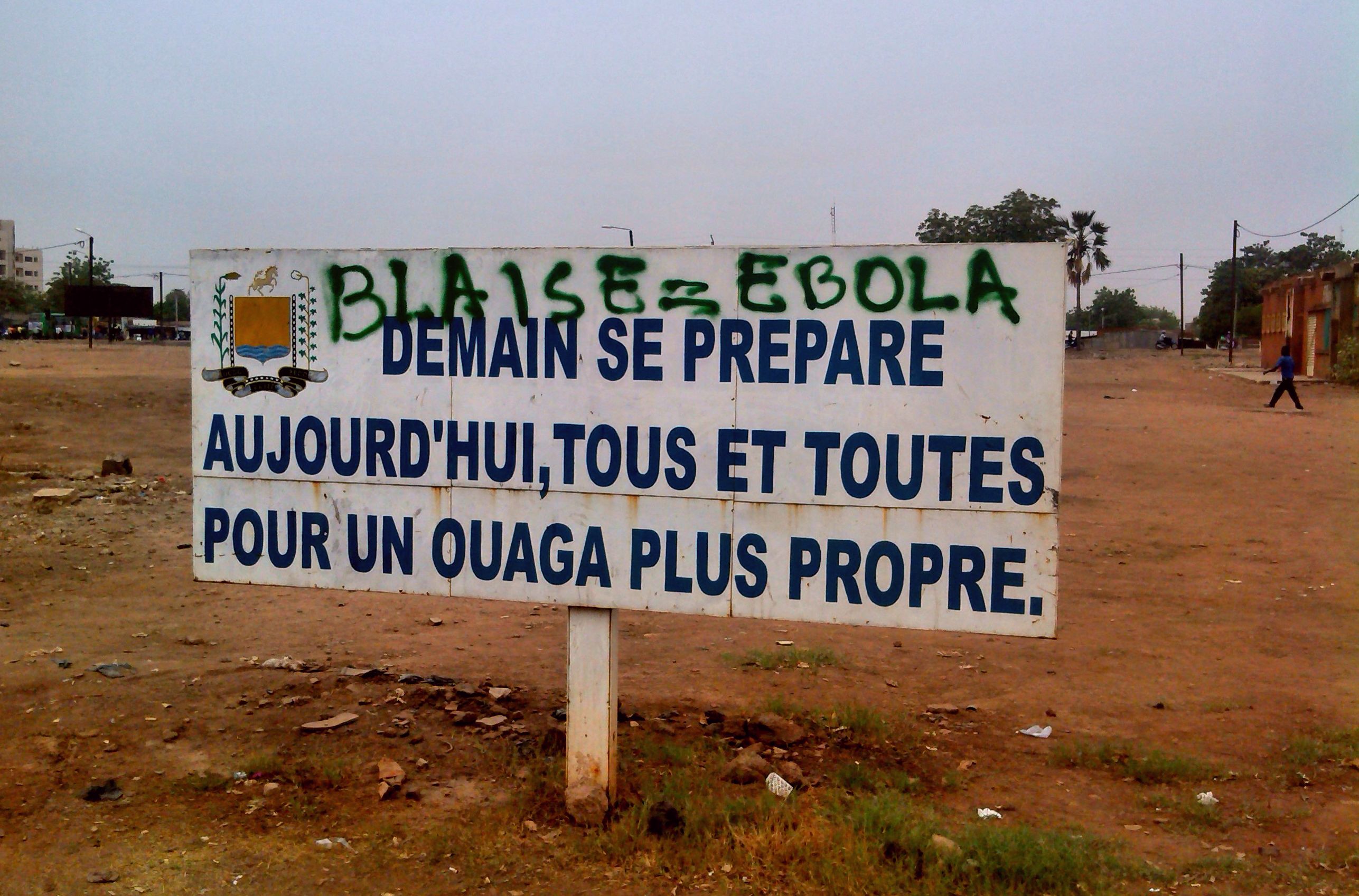 A few months before, I had followed the turmoil that rapidly revolutionized the political landscape of Burkina Faso from afar, behind my computer screen. Going back to Ouagadougou last February, after some years of absence, I noticed that the city largely corresponded to the memories I had of it: with the exception of the impressive burnt structure of the National Assembly, and some writings on the walls, I could find no immediate sign of the revolution. The FESPACO (the biennial pan-African cinema festival) was bringing to town hundreds of filmmakers, scholars and movie addicts, and I could see T-shirts depicting Thomas Sankara (head of the radical junta between 1983 and 1987 and a political icon for intellectuals and young activists opposed to the previous regime) nearly everywhere – but that had always been the case: quite paradoxically, Compaoré’s mild authoritarianism seemed to tolerate some form of veneration for the former brother in arms and popular political leader that he had contributed to demote (and, very probably, to execute).

Despite being there to conduct research on a different topic, I couldn’t help but ask my friends and acquaintances their point of view on the transition. Some of them – the younger ones, graduate students trying to find a job as consultants or to enroll in a master course – had participated at least to the massive peaceful rally of Tuesday October 28th 2014 (confrontation with the army and fires around the city would occur two days later). But most people had followed the events on the radio or through foreign TV broadcasters, and had become aware of the seriousness of the situation only by observing, from their courtyards, clouds of smoke coming up from the city center. In the university campus, I could now frequently listen to heated discussions on the transitional government and how more radical it should have been in addressing urgent political and economic issues (food prices, youth unemployment, the reform of the army) or, on the opposite, how it should stick to its temporary and “neutral” mandate. Such discussions would often terminate in disquisitions over the juridical subtleties of the transition chart, or on tracing back to the past affiliations of the emerging characters in the “new” political arena. At that point, I was lost. I should have remembered that debating politics is often an art of miniatures and details in Burkina Faso.

What was strikingly new, for me as a researcher visiting Burkina Faso since 2008, but especially for the generation born during Compaoré’s regime (often referred to as the génération consciente by activists from Balai Citoyen and other youth movements), was the fact that these discussions were now open-ended. After so many years of palpable skepticism towards the electoral procedures and the real opportunities for change, no candidate or party was seen as the inevitable winner for the next elections anymore. The publication of a poll predicting the victory of Zephirin Diabré, former speaker for the opposition, was widely commented and contested in the newspapers; rumors about France having already endorsed Roch Kaboré (the poll ranked him at the second place at only few percentage points from the winner), leader of the MPP party which originated from a major breakup from the presidential party on January 2014, caused quite a stir. In fact, any attempt at “shutting down” this transformational phase sounded premature, and the future seemed now more unpredictable than ever. Some commentators were already criticizing the wave of ruecratie (“street-cracy”, or the government of the street mob) that was supposedly invading the country, with demonstrators protesting – although at a slowing pace – against controversial ministerial nominations or administrative decisions. When a political space opens up, strange and new things happen.

Far from the capital, the towns in the South-West region where I conducted part of my fieldwork had not been spared by the political unrest. Where I stayed, groups of youth had gathered and demonstrated around the municipal headquarters but finally gave up plans of more aggressive attacks toward the building – unlike what happened in Bobo-Dioulasso, the country’s second biggest city, where discontent towards the government merged with local political controversies and the municipality building was burnt. “If they had burnt it here – I was told – now we wouldn’t have the money to rebuild it and that would be bad for ‘development’. So they were finally convinced to be more peaceful”. A former vice-mayor in the same area admitted with some embarrassment: “Especially here, people were generous towards the institutions: things could have been much worse. And people were probably right in their discontent, Blaise was in charge for quite too long, and he exaggerated in trying to run again”. Burnt or not, all municipal and regional authorities, dominated for the most part by representatives of CDP (Compaoré’s party), were dissolved by the newly-formed transitional government just a couple of weeks after the revolution and replaced with “special delegations”. The room was open for political entrepreneurs to aggregate support from the voters, and to form networks or make good use of existing ones: some local sections of the “new” parties were already opening in villages and towns, and the first rallies and meetings were announced.

“If a hand is sick, how can a single finger be suddenly separated from it and claim to be healthy, or to do better than the other fingers? I would be surprised”. Another former local politician expressed in this way his disillusionment on political change in the country. Many people I spoke with shared some of his disenchantment: it is true that, with the notable exception of Benewendé Sankara, historical opponent to Blaise and candidate for the sankaristes, most prominent politicians have been somehow involved with the past regime. Furthermore, CDP is still trying to mend its broken pieces, reassemble the “blaisist” front and run again. Having this risk in mind, the transitional government has approved in April a new electoral code, formally forbidding all those who openly supported constitutional change in favor of Blaise to run for the elections: this move has caused much criticism, including a brief crisis about a comment from the US ambassador, and has opened a debate on who will (and will not) be affected by the ban. With only a few months before the scheduled elections, this is but one of the issues that the government will have to manage in order to assure a smooth conclusion to the transition and fulfil its mandate. In the meantime, change – sometimes more vocal, sometimes discreet – is already going on.

Cristiano Lanzano is Senior Researcher at the Nordic Africa Institute. He has worked on urban culture and youth, rural development, natural resources management and mining. He has conducted fieldwork in Senegal and Burkina Faso.

« Burundi: after the coup attempt, by Gudrun Sif Fridriksdottir A review of Maria Eriksson Baaz and Maria Sterns book Sexual violence as a weapon of war? Perceptions, prescriptions, problems in the Congo and beyond, by Nadja Piiroinen (2015). »