I took the family for a holiday on the paradise island Zanzibar. White sand, turquoise water and colorful marine life. Easy living. The last two days we left our resort and toured the island. It was a week after the Tanzanian and Zanzibari elections. Mindful that elections can be rough, and with previous research experiences of elections in Ghana, Liberia and Sierra Leone, I kept an ear to the ground, talked to Zanzibaris and consulted some experts on Zanzibari politics. The Zanzibar Electoral Commission (ZEC) had on Wednesday annulled results of the presidential election for semi-independent Zanzibar, but affirmed the result for the larger Tanzanian election. The ZEC proposed a re-election within 90 days on Zanzibar due to voting irregularities in some districts, particularly on Pemba. It was suggested that the opposition Civic United Front (CUF) had stuffed ballot boxes particularly in regions they controlled. From a CUF perspective the election commission was not considered an independent body but part of the ruling Chama Cha Mapinduzi (CCM) machinery and the announcement of annulling the election was simple seen as CCM thieving their victory. Most Zanzibaris I talked to believed so too. Surprisingly few had good things to say about CCM – but then again I was on holiday and did not talk to that many. 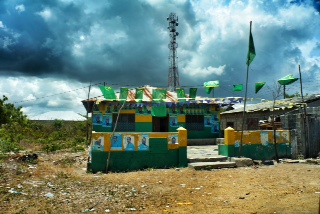 On Friday we drove around the north of the island and, except for posters and flags in smaller towns, politics appeared rather apart and we could not detect any tension. Yet I seem to have this predisposition for commotion. Things blow up when I get close. As we in the late afternoon entered Stona Town and drove through Darajani market the surroundings were surprisingly eerie. Stalls and shops were closed and at the far end a crowd blocked the road. We tried unsuccessfully to navigate around the crowd through a side alley, but had to turn around. Then a bomb detonated nearby sending people helter-skelter, but they did in no way panic and some where even smiling. Later at the hotel we learned that it was a controlled detonation carried out by the police. It was suggested that the police had detected a bomb (or something bomb-like) and blew it up as a precaution, yet some experts I have talked to proposed that it could as well have been a decoy to be able to round up people in the opposition party as ‘suspects’. On Saturday two more bombs exploded but this time less central, and again observing people around us we could, somewhat surprised, see how they barely took notice of the distant blasts. 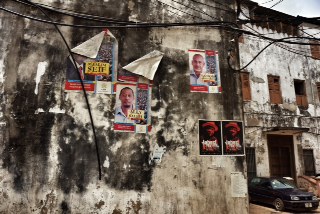 Zanzibar experienced really hard elections in 2000 and 2005 with violent clashes, rough arrests of opposition, leaving thousands of people dead. It is interesting that Zanzibar on the surface appear so calm. Young people are not rooming the streets dressed in party t-shirts as the West African elections I experienced. Poor city-dwellers are not looking for opportunities to loot stores and target the affluent. Crowds are this far not tense, but they may soon be. On Friday CUF issued a three day ultimatum demanding that vote counting must be continued. If this is not adhered to by today it may well be the starting point for new demonstrations and ultimately clashes. Most likely this threat is CUF leader Seif Sharrif Hamad’s way of bargaining a better political position, but such threats can easily backfire. One should furthermore remember that Hamad and CUF have been part of the Government of National Unity formed after the last election in 2010 under current President Ali Mohamed Shein of CCM. As most prominent CUF politicians Hamad also has a background in CCM – having held ministerial positions in the past. The fact that he is part of the same political elite may eventually have a soothing effect on the current conflict, but on the other hand, supporters in both camps may view it differently. As a Stone town resident said: the politicians are from the same generation, have all ruled almost since independence, but they are no longer connected to the masses. The youth of Zanzibar have completely different life experiences and needs. In the end they will see the change.

I am in no way an expert of Zanzibari politics. However I will watch the events unfolding with great interest and keep fingers crossed that things will not get out of hand. Zanzibari politics are indeed fragile as history has shown. In the mean time I recommend you reading two quite contrasting articles which both have a historic take on the current crisis:

In Zanzibar, democracy, peace and unity are at stake after annulled elections (Washington Post)

and another interesting background text:

Electoral shenanigans in Zanzibar: a sign of CCM desperation? (ARI)

« “You think this is an Ebola Office?” Rebuilding trust in the aftermath of Sierra Leone’s outbreak, by Luisa Enria “Rogue, Rogue, Rogue…” – Marketscapes, Criminality and Society in Liberia’s Postwar Borderlands, by Richard Akum »