Ebola: How a People’s Science Helped End an Epidemic is one of the first books to provide an in-depth analysis of the recent pandemic in West Africa, The author Paul Richards has done an excellent job in bringing to the fore community efforts in responding to the virus.

On a recent visit to Freetown, a Sierra Leonean friend who played an integral part in the Ebola response smiled wryly as we discussed the likely stream of books by “international experts” telling how the virus was defeated in West Africa. So when I was asked to review this book, I approached the task with a degree of trepidation.

I need not have been so concerned. Paul Richards is an anthropologist, not an epidemiologist, and one with over 40 years’ experience working in the Mano River region. For much of that time he has lived there. He is someone with intimate knowledge of the fluid social structures that extend across the borders of Sierra Leone, Liberia and Guinea – the three countries where Ebola took hold. 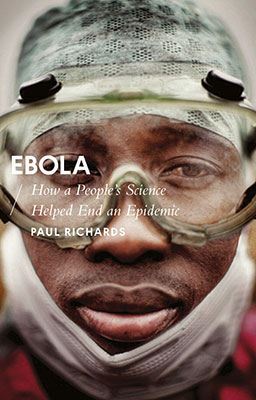 The vital role played by local health care professionals and burial teams, many of who perished, has not been given sufficient attention. Community voices have been pushed to the background. This book is a welcome example of redress. It turns attention away from the international and government response in an effort to understand how local, often remote, communities responded to the threat posed by Ebola. Interspersed with anthropological theory, perhaps the least engaging feature for a generalist reader, the author uses practical examples from communities, predominantly in Sierra Leone, to argue convincingly that much can be learned from the way ordinary people adapted to fight the virus.

Burial practices, widely seen as a key transmitter, are explored in detail. The reader is provided with valuable insight into the social importance of honouring the dead and the subtle differences that exist between the practices of the predominant ethnic groups in Sierra Leone: the Mende, Temne and Limba. This is exactly the sort of nuance that was mostly overlooked by the international response: for example, black body bags were initially used for burials, when the colour of mourning across the country is white.

Ebola was a social disease in the way that it spread from the sick to the carer, devastating families. Richards argues that chains of transmission could be best understood by community leaders. Highlighting successful strategies that were employed at this level is a highly valuable contribution.

One particularly fascinating example explores how a women’s secret society group in Jawei chiefdom, Sierra Leone, sought to incorporate protective materials into traditional burial rituals. The point, emphasised throughout the text, is that where communities were properly educated about the virus and its transmission – rather than directed to do something unfamiliar without understanding the reason why – they were more willing and quicker to adapt. Tradition does not necessarily equate to stasis.

The hypothesis that “local common sense allied to local ingenuity helped end the Ebola outbreak” (p.126) is one that merits wider attention among humanitarian policymakers and practitioners. Without a cure, and with palliative care the main treatment, changing attitudes was critically important. For future epidemics, Richards proposes an approach which involves the co-production of knowledge between international experts and local being likely to be more effective in encouraging societal behaviour change. This alludes to an important critique of international response which is worth reinforcing and which begs the question: could large sums spent on building treatment centres have been better spent on strategies for community empowerment?

The brevity of the book means that the potential long term implication of empowering traditional leaders in local communities is not explored. What might it mean for democratic development in the region? For the rights of women? And does it ostracise youth from decision-making – one of the factors that tipped Sierra Leone into civil war in the 1990s? Social stigma, a reality facing many Ebola survivors, is also not dealt with in detail. Exploring how a “people’s science” approach could be constructively utilised in this regard would be of immense social value as Richards acknowledges that “survivor reintegration poses a range of unresolved questions”.

Overall the insights provided in this book are thought-provoking and draw attention to a vital yet under-emphasised element of the Ebola response – the role played by ordinary citizens. I would encourage policymakers involved in responding to global pandemics to read this book and to think more seriously about how to develop approaches that really listen to, attempt to understand and learn from affected communities.

Furthermore, by suggesting that local communities have the capacity to think like epidemiologists the book implicitly questions the way in which societal knowledge is created. Whether that be through the incorporation of disease control strategies into secret society rituals, the creation of new dance styles to avoid touching, or the use of bin-liners to allow for care with reduced risk of infection, the examples presented demonstrate an adaptability and resilience which is not only to be admired but must be better understood and learned from.

Jamie Hitchen is Policy Researcher at Africa Research Institute. During the Ebola outbreak he wrote a series of articles focusing on local actors and wider, longer-term implications for the country. He tweets @jchitchen. This review first appeared on the Africa at LSE blog.

« How John Richardson Joined the NPFL: Charles Taylor’s Confidant Speaks on Liberian Politics and American Warmongering, by Brooks Marmon Ebola: why has the previous existence of Ebola in the Mano river region not been discussed? »