The Crisis in CAR: Navigating Myths and Interests, by Ilmari Käihkö and Mats Utas

“Anarchy”, “religious war”, “genocide” and, recently, “cannibalism” – these are some of the most commonly used words in Western news media when referring to the crisis in the Central African Republic (CAR), at least since the takeover of power by the rebel coalition Séléka in March 2013. The conflict, which in December alone resulted in approximately one thousand deaths, has uprooted one-fifth of CAR’s population. This conflict was by and large a consequence of former rebel leaders’ and some of their soldiers’ lack of future prospects within the troubled political-economy of the country. It is not easy to control military forces during a war – even less so after a war, when the minimum unifier (typically, regime change) has been achieved. In many cases, this is when the real problems start, as interests begin to diverge and promises made by the politicians to the fighters are not kept. This is very much the case in CAR.

Séléka was disbanded after the coup when its leader, Michel Djotodia, declared himself the new interim president of CAR. The coalition subsequently fell apart and began carrying out atrocities and looting Bangui and its surroundings with impunity, as they felt Djotodia was still indebted to them. In reaction to the violence and by and large to protect itself, the population founded self-defence groups collectively referred to as anti-balaka (“anti-machete”). While Séléka is predominantly Muslim, they have never targeted people because of their faith. It is thus slightly surprising that anti-balaka, at least in Bangui, have used their Christian faith as a common denominator and targeted Muslims. Perhaps it is a strategy to draw sympathy from the West; it is certainly the key reason why Western media currently label the conflict “religious”. This is clearly an oversimplification…..

A popularized version is also available in the Danish Journal Udvikling (Vol 41, No 2 (2014)) as open access http://ipaper.ipapercms.dk/Udenrigsministeriet/Udvikling/2014/Udvikling214/?Page=48 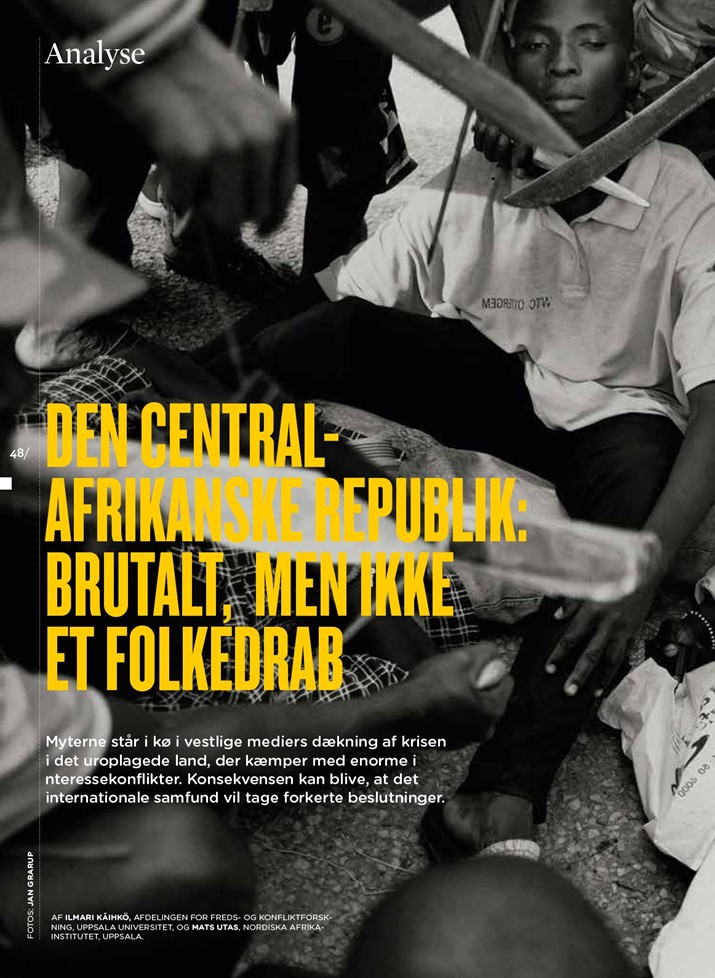 « Beyond the Façade and what Operation Usalama watch exposes about the war on Terror in Kenya, by Hawa Noor Short-time Girls: Underage prostitution is rampant in a society reeling from poverty and war, By Clair MacDougall »