This weekend, Newsweek published a relatively controversial article about the recent Ebola outbreak in West Africa. Here’s the cover:

Let’s just say it’s not exactly an original piece of journalism either.

I found myself frustrated not only by the cover and the article, but also by the editor-in-chief’s condescending response to his critics: 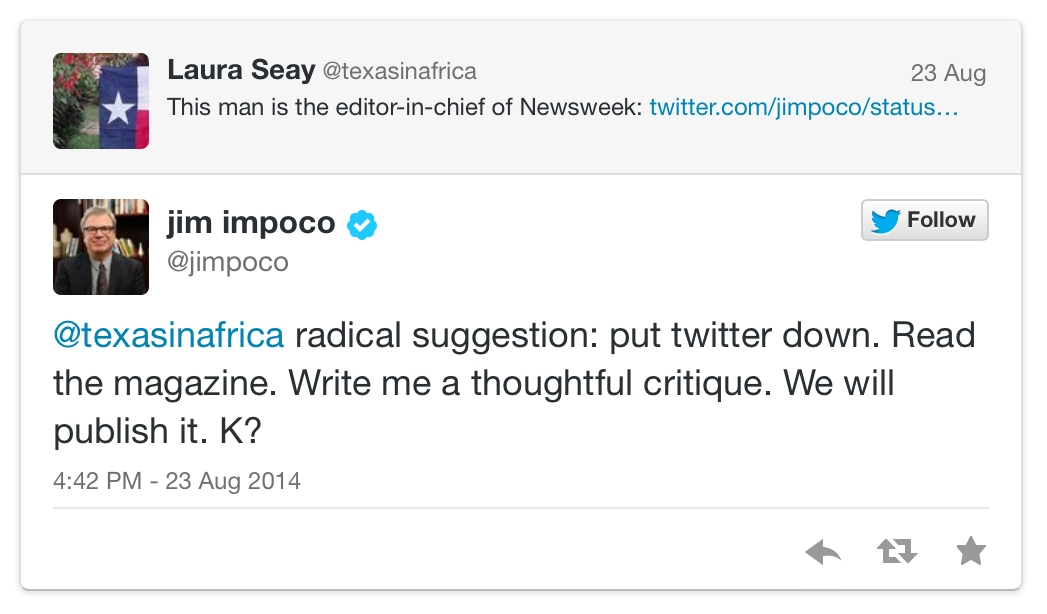 Not exactly the kind of response you want from an editor-in-chief, right? I vented to Facebook friends about the magazine cover, the thin claims of the article and its editor-in-chief’s rude response to critical tweets. One of my friends pointed out that the magazine has been propagating race-baiting click bait for a while now. (Yes, I used the word ‘bait’ twice, and we, the scholars, have bitten). So it shouldn’t be surprising to see the old trope of apes standing in for black folks or sexually charged Grubb Street prognostications regarding ‘back door’ entry of Ebola into the US gracing its front pages. (As one tweeter noted, It doesn’t take a semiotician to see what’s going on here).

Nor is surprising to see ‘exotic foods’ as the site for the latest in what journalist Howard French calls ‘ooga boogah’ writing on the Ebola epidemic. As French recently wrote,

He has also referenced Chinua Achebe’s biting criticism of Conrad’s Heart of Darkness to bring attention to how Western media continue to write about Africa.

There are some pretty standard “Africa” tropes in the article, which incidentally, takes place in the Bronx: a Ghanaian interlocutor speaks with a “thick accent”; the “heat and stench… assault” the authors in a (Bronx) market. The authors seem to mock the irrational fears expressed by Donald Trump while also trafficking in them. But the article is mostly a superficial account that overstates what is known about the trade in bushmeat and the biological and public health implications of an unregulated industry. The scientific studies it cites are small and cautious about the implications of bushmeat traffic at the borders of the US. The experts to whom they speak provide their best guesses about the public health stakes of loose border controls. The article also raises as many questions as it answers:

1. What the heck are they talking about when they are talking about bush meat? While the scientific literature is clear about what they mean by bushmeat, the article seems to lump all kinds together. “Bushmeat” has become a catchall for every kind of meat that one might transport across international borders, including the mollusks, grasscutter and dried fish found in a variety of West African cuisine. None of these are culprits in the Ebola outbreaks. But the article also made me wonder about how I should think about the locavore/hunting-for-food lifestyles that are increasingly en vogue among a certain class of Americans. Should American hunters be worried about the animals they kill and prepare for eating? (Seems so.)

2. So, let’s say we want to focus on threats from current outbreak of Ebola, as the title of the piece suggests (but isn’t really done in the article, except to say that Ebola was not found among animals in one of the studies cited). Which animals are coming from Guinea, Sierra Leone and Liberia? How many of them are capable of harboring deadly viruses like Ebola?

3. By the authors’ own account, dining practices have already changed because of the outbreak. The authors can’t even find any bushmeat. Their Ghanaian source is telling them that it’s increasingly difficult to find bushmeat these days. Isn’t it worth explicitly noting that people’s fears might be prompting all kinds of rapid change? Now that we know that, might we ask what other kinds of change is possible: are hunters, butchers and merchants now handling bushmeat with greater caution?

I leave with Dave Chappelle’s hilarious bit on race and food:

« The Complexity of Ebola & Its Misrepresentation in the West, by Theresa Ammann Beyond the health crisis: Ebola hits Liberia’s economy hard, by Patrick Hettinger »