Narratives of Injustice: The Counting of Votes in Aboabo, Ghana (guest post by Ulrik Jennische)

The Election Day in Ghana has passed. The incumbent president John D. Mahama and his National Democratic Congress, NDC, have been declared winner by the Electoral Commission, EC. Celebrations have been held across the country.

But the electoral process is not over. The leading opposition New Patriotic Party, NPP, with its ‘flagbearer’ Nana Akufo-Addo is contesting the result, claiming their victory has been stolen by the NDC and EC. They have decided to gather their evidence and go to court, testing the judicial side of the Ghanaian democracy.

Due to malfunctioning verification machines the election day of last Friday the 7th had to be stretched to the following Saturday as well. However, already on Friday results were coming in that leaned toward a NDC victory. Still, NPP representatives held a press conference on Saturday afternoon claiming that reports they received from their polling agents all over the country predicted their much wanted victory. On Sunday EC declared NDC the winner. Speculations are rife. Were the reports given to NPP false, or has NDC been able to defy the new biometric verification machines and somehow added NDC votes to the ballot boxes? Or have NPP early on realized the outcome of the voting, and hence spreading suspicions of irregularities, hoping for a second chance? Nevertheless, their early press conference was criticized from NDC as well as the Ghana National Peace Council.

On Saturday the 8th, the same day as the press conference, information and rumors spread through twitter and the websites of the major radio channels in the country that two NPP supporters under gunpoint had tried to steal verification machines from a polling station in Aboabo in Tamale during Friday the 7th. Allegedly they had pointed their guns at the line of voters but were obstructed and overpowered by the crowd. I was in Aboabo during that day and experienced only calm, peacefulness and hope.

For the rest of Tamale and Ghana, it came as no surprise that the incident occurred in Aboabo. The neighborhood is an important business and residential district in the centre of Tamale, the major city in northern Ghana, and capital of the Northern Region. Aboabo has during the last decades been characterized by occasional clashes between supporters of the two major parties. The murder of the Yaa Naa, the Paramount Chief in 2002 further intensified the tension. This chieftaincy dispute centers on the alternation of the chiefly power between the two branches, or gates, of the royal family, Abudu and Andani, to which all Dagomba belong. The perpetrators of the murder are believed to be Abudus, who affiliated with the, at the time, ruling NPP, were somehow able to avoid justice. Residents of Aboabo are primarily Abudus and as the conflict over the years have been politicized, further linking the Abudus to the NPP (and Andanis to the NDC), most of them are strong NPP supporters.

Violent incident have occurred in Aboabo on several occasions as politics and chieftaincy matters interact. Houses have been burnt, and individuals have been killed. After a clash in 2009 just outside Aboabo, in which a NDC supporter was killed, five NPP supporters of which some reside in Aboabo were arrested. The clash occurred directly after the results of the previous elections became public, acknowledging the NDC victory. The five young men have been imprisoned for almost four years without trial. Friends and family members of the arrested are convinced of their innocence, a conviction that is strengthened by the stalled legal process.

It is difficult to write about this conflict, as everything told must be further explained, historicized and contextualized. Perhaps the most important aspect to emphasize is how this conflict is not only formed by incidents in past, but constantly being reproduced and reshaped in the everyday interaction of the present. Therefore, it becomes particularly important to stress the peacefulness and calm that that do characterizes Aboabo and Tamale of today. Despite the deeply politicized situation, despite all the wrongdoings from both sides, and despite being in the middle of an electoral process where so much is at stake, I am struck how the worries and concerns are blended with kindness, peace, humor, and anticipation of the Aboabo voters.

On Saturday the 8th, I went back to Aboabo.

I meet Amir in his little shop. Amir is a strong member of one of the NPP youth wings in Aboabo and his shop is conveniently located directly opposite the office of his youth wing. He is listening to the news broadcast on the radio. The information he receives makes him irritated and anxious. He says he is not worried, though, as NPP has just promised victory in the press conference, but his eyes and his tense voice says something else. As it is time for the evening prayers he sees me off and directs me down to the school where one polling station is still active. I walk along the narrow street that was improved with lights and asphalt during the NPP rule 2001-2008. The low houses have shops and openings facing the street. Many residents are out walking, either toward the mosques for their prayers or following me down to the school that for the time functions as a polling station. We cross a sewer canal, face a crowd of sheep and stretch our steps to avoid the mud as we approach the schoolyard.

Many people have gathered at the schoolyard. They are standing around an open area demarcated by plastic ropes. Inside the demarcation police officers and the military are stationed. Party representatives together with EC officers stand around a big table on which they have sorted the ballots. We the spectators are ready with pen, paper and cell phone to note and communicate the results as they eventually will be declared. Husein is standing on the other side of the plastic rope. He is an observer for the NPP and is supposed to make sure everything is made transparent and correct. I have spoken to him before on his and his family’s deep involvement in the NPP in Aboabo. He constantly receives reports from constituencies and polling stations all over the country that NPP has surprisingly won, so he is happy with the results so far, convinced NPP in the end will be declared the winner. Meanwhile he is worried over the many incidents having occurred at polling stations all over Ghana, incidents in which NPP representatives and voters have been obstructed. In one constituency not a single NPP vote has been registered, despite the local chairman of the party and the polling agent being certain they have put their ballots in the box. Some NPP observers in another constituency have been hindered to approach the table when expressing concerns over the slow sorting and counting process. There are many rumors and unconfirmed allegations over smaller and bigger incidents that together form a narrative in which the NPP in Aboabo are seen as discouraged and obstructed in their democratic attempt to regain power. 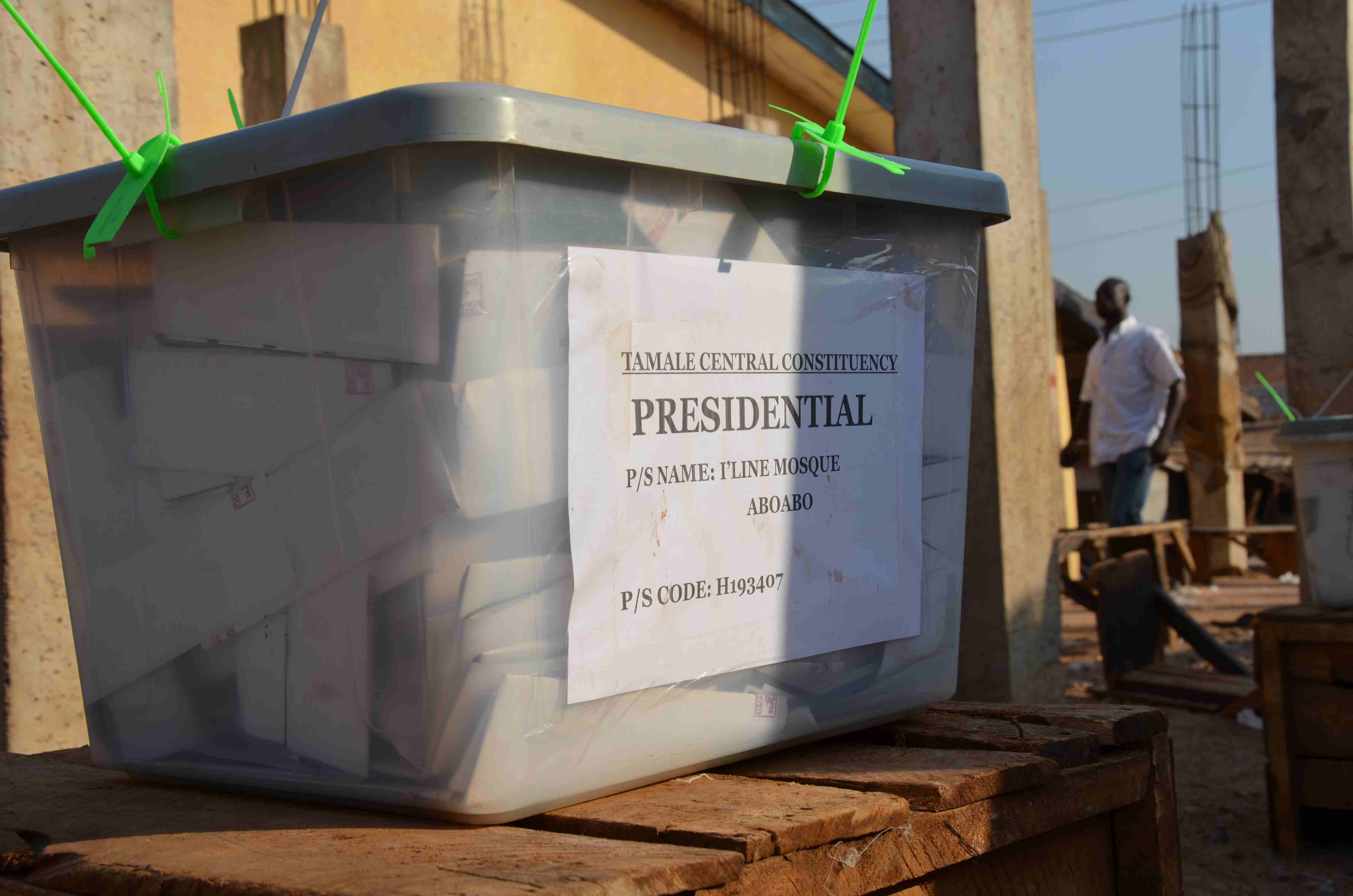 I ask Husein if he knows anything about the incident where the two verifications machines were stolen. He says he knows what happened very well as he visited the two NPP supporters in the hospital. They were both placed at the polling station located in one of the few strong NDC sites in Aboabo. According to them they were of course completely innocent to all allegations. They did not try to steal any machines, nor did they bring any weapon. They were however attacked by the NDC crowd, beaten and abused before they were sent to the hospital. “They want to abuse and frighten our people”, Husein says and continues “It’s a lie, a very big lie and wicked one of course.” What is true is at this stage impossible to know. But for the people gathered at the schoolyard it further supports the narrative of injustice.

A military officer points at me and my neighbors with a stick, as my bag has touched the plastic rope. “Let the rope have a breathing space” he says. We all take a few steps back, but shortly find ourselves leaning at the rope once again.

It is time to count the votes for the presidential election. They start with NDC and the EC officer counts the votes loud, holding up each and every ballot until 73. Husein is surprised, “last election they got maybe twenty”, he says. After counting the three ballots for one of the smaller parties it is time for NPP. The EC officer begins to count, “one, two, three…” He holds up the ballot so everybody can see. When he reaches 100 he becomes slightly tired. While the other EC men bundle the ballots he drinks some water and wipes the drops of sweat from his forehead. He continues, “one, two, three…”. It all takes a long time; everybody can see the thick pile of votes. At 300 the police begin to feel tired. Some of them sit down on some plastic chair and one officer leans the head in his hands, while closing his eyes. By 500 even the children are sitting down. They are drawing in the sand. The boys next to me look at each other, asserting “we’ll reach 1000!” They did not reach 1000. But they did get 747. We all look around to control each other’s notes, confirming the number. They text and call their family and friends.

The transparency is complete. The spectators or voters see everything that happen, they control and guarantee the correctness of the procedure in a similar way as it is done in most of the 26 000 polling stations all over Ghana. How can that transparency coexist with the suspicions and conspiratorial rumors spreading at the schoolyard of Aboabo?

I am thinking of what Husein is saying. What has happened, who is the perpetrator, and who is the victim? He speaks convincingly and the more I listen the more I begin to lean on him, feeling his concern and his injustice. If I, with an intention and salary, to be neutral and analytical begin to fold, giving in to the rumors and allegations how is it for the people living in this reality? How do they stay calm when constantly facing injustice, feeling nobody is listening to them, and being accused for actions they have not committed? No matter what has happened the narrative being formed in this context shapes and is shaped by the reality in which it exists. That such a narrative would lead to conflict and perhaps violence, would be of no surprise. But what is surprising and more interesting is the serenity and convinced democratic belief in Aboabo.

Last Friday, the 14th and a week after Election Day, I find myself once again in Aboabo. I am trying to find Amir, but he has not yet come to town. Some other members of the NPP youth wing are there, however. They are as disappointed and irritated as they are talkative. “They stole it, NDC stole it, and everybody knows it.” Encouraged by NPPs decision to go to court, they claim to be convinced their victory will come. Still, I believe I hear some doubts in their voices. While NDC supporters see themselves as the winner, looking forward to four more years of Mahama rule, the residents in Aboabo, believe the fight is not yet over. “The country is silent,” one of youth wing executives say, obviously not listening to the ongoing celebrations and cheers in most part of the city. “Nobody is crying, nobody is singing.” Once again their perception of the political situation differs from that of the NDC counterparts.

Ulrik Jennische is a PhD Candidate in Social Anthropology at Stockholm University. He is currently conducted a fieldwork in Tamale, northern Ghana. He is blogging (in Swedish) at www.faltrapport.wordpress.com.