I must say that I have been slightly disappointed with the political temperature in Accra. The few days I have spent in Accra have showed nothing like the political spirit of Sierra Leone, or even Liberia. But Wednesday turned out to be the real campaigning day in Accra and there was suddenly nothing wrong with elections frenzy and party spirit. Small rallies of supporters in party attire with banners and flags roamed downtown; a few groups of young men ran along the streets, but most of the campaigning takes place in caravans of cars, with supporters leaning out through the windows shouting party slogans and blowing vuvuzelas. Typically a group of motorbike riders would come first, driving at maximum speed, blowing their horns, ignoring traffic rules; at times against busy traffic on one-way streets. A posh car or two, and then tro-tro’s (minibuses) and taxis would follow. In the evening heads of parties and local MPs held meetings at various places and crisscrossed through town creating a joyful chaos. Supporters of the parties met up in friendly clashes where abusive language was used but violence was not in the air. Mockery is a common form of campaigning and a friend of mine saw a tro-tro driver in one of the NDC crowds stopping in the middle of the road just to throw himself on the ground with feet and hands up in the air. This act was with reference to an NPP meeting a few days ago in Kumasi when a stage broke down under the weight of presidential candidate Akufo-Addo and other NPP seniors who subsequently fell to the ground with hands and feet in the air. There is clearly room for comedy. Thursday has been much more quite with no real rallies, although lots of talks about politics. Friday is time to vote.

Voting according to belonging 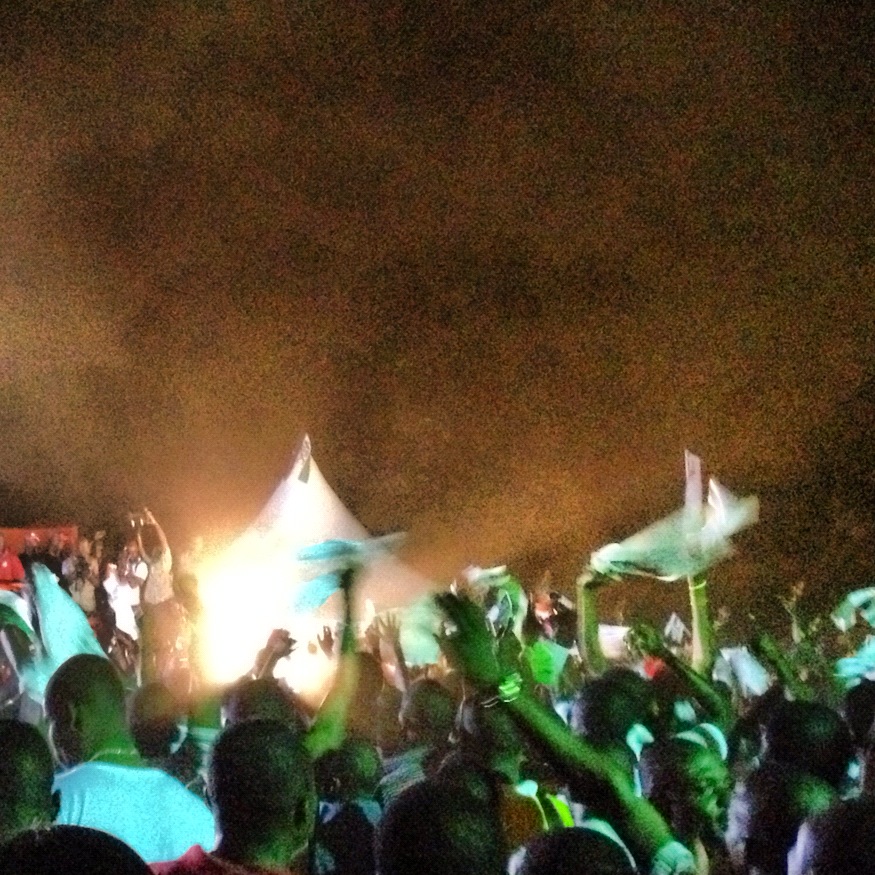 In the elections President John Mahama and his incumbent NDC stands against Nana Akufo-Addo of the NPP. There are several other contesting parties but they will only get minor votes. The question is if one of the two parties will win outright in the first round, but there is a good chance/risk that there will be a run-off scheduled for December 28. Mahama inherited the presidency when president John Atta Mills passed away in July this year and he has managed to appear as a serious candidate, partly surfing on the waves of Atta Mills passing and the smooth transition that subsequently followed. Tuesday night I heard him talk in front of a crowd at the University of Legon and his appearance was rather down to earth and his speech was short and direct. Nana Akufo-Addo, who won the first round in the 2008 elections only to lose the run-off, on the other hand is said to be more elitist and arrogant but has a firm grip on southern much of the south. A discussion with a young man from NPP heartland gives an indication of how he is viewed, but also why he and NPP still stands a good chance.

Collins from Kumasi told me he will vote for NPP because it is in his blood. He is however not very keen on Akufo-Addo as he “talks too much and cannot really be trusted”. He really puts more trust in Mahama, but would never vote for NDC. The presidential candidate he believes most in is however Kwesi Nduom, the candidate for the newly formed PPP. When I ask him why he would vote for NPP he states that it is like a family and that people from NPP areas vote NPP because they know that if they are in power they have good chances of pushing their “projects” forward. In the NPP sphere he has several family members, in the extended sense, that will likely receive positions if not within the government itself so within state agencies that he would indirectly benefit from. Indeed he also has acquaintances within the NDC, but then he prefers to call them friends and although he states that he may benefit a little from them it is not to the same extent.

Being used to politics in Sierra Leone and Liberia it has been rather impressive to follow the debates leading up to the Ghanaian election. It is in fact quite hard to compare Ghanaian politics with the two other West African countries I am more familiar with. In Ghana there is a real debate over what we in the western world perceive as real political issues. For instance the question of free schooling has been a hotly debated issue. Still however regional voting patterns are the most decisive feature of the elections as indicated by Collins above.

The close results of last election and the violent skirmishes that followed, but fortunately never escalated to anything serious – but see the early parts of this documentary – have made people anxious that a similar scenario may arise if the elections are close again. Although there have been little violence up until today, except the few minor incidents that would be anticipated, media is to a surprising extent talking about peace clearly indicating the fear that another close election could lead to renewed tension between the two main parties. Also on social media such as twitter, little party politics is played out and the peace message dominates. A peace pact between all parties was signed on November 27th in Kumasi showing that all parties really aim at peaceful elections but also that amongst them as well there are worries that the situation could get out of hand. At this time there is not much indicating that this will be the case and interaction between the followers of the parties appear very peaceful, but we know that small incidents and the rumor mills around such events may have serious repercussions.

A heavy thunderstorm currently cools down Accra whilst people prepare for tomorrows elections in a country that has seen much progress over the last decades; a route that any of the two parties contesting power will clearly continue to follow.