As elections loom over Zimbabwe in 2013, there is still no resolution to the longstanding political stalemate. The three political parties that formed a Government of National Unity (GNU) in 2008 have not implemented the reforms that would have prepared the country for elections.

A key reform was the drafting of a new constitution which has passed the formation stages and allowed for people driven and participatory process. The July 18, 2012 draft constitution was accepted by an All Stakeholders Conference and is now to be decided upon by the three political party heads – Robert Mugabe (Zanu PF), Morgan Tsvangirai (MDC-T) and Welshman Ncube (MDC-N). This is unfortunate, as the result of this whole constitutional making process will lead to a negotiated constitution that reflects the immediate interests of the three parties (which include self-preservation, protection from prosecution and access to resources among others), and not a national constitution that proscribes the governance mechanisms and legal framework for the state: irrespective of who is in power. Thus, the end product will not solve the problem but is instead likely to prolong it.

The country is not ready for elections and neither are the political parties as not one of them is assured of winning an election. The MDC formations have spectacularly lost ground since 2008. The MDC MP’s and Ministers are enjoying the same perks as those in Zanu PF and, as such, the people see them as one and the same. This is compounded by the cases of corruption by MDC councillors and Prime Minister Tsvangirai’s “Sex-Gate” scandals which have led to the MDC losing the moral high-ground. Additionally, the MDC are unable to campaign freely. They are not allowed to campaign through open rallies as the police refuse them permission to do so. They also do not have access to the media which is controlled by Zanu PF.

While Zanu PF (and in particular president Mugabe) have strengthened their position amongst the voters since 2008 (recent opinion polls show they lead the MDC), there are no certainties that they will win the elections as there are a large number of protest voters. Furthermore, elections will intensify the divisions within Zanu PF and raise the sensitive subject of the presidential succession. The Mujuru and Munangagwa factions within Zanu PF are well known. However, a closer look at Zanu PF suggests that president Mugabe may have a faction of his own that is closely linked to the unofficial “Joint Operations Command” which includes the security chiefs. A smaller faction called the “opportunists” and sometimes the “hardliners” is said to also exist, as does a faction from within the military made up of less senior officers, who may also have their own preferred presidential candidate. Thus, the convergence on the presidency within Zanu PF itself could become a fierce battle. Additionally, it has also dawned on Zanu PF that if they lose the election they may not be allowed to refuse to leave office again. As a result, all three party leaders would prefer things to continue as they are. It is my sense that the three party heads are likely to strike a deal between themselves and move into a continued or second GNU (a GNU II).

The economy has improved from the all-time lows of 2003 and 2008 and this has lightened the atmosphere across the country. However, as soon as one scratches below the surface and asks about the forthcoming elections, a whole world of fear and uncertainty presents itself. It is as if everybody is consciously living in a “make-belief-world” at present, cautiously experiencing the peace, and just waiting for the violent reality of the elections to descend upon them. There is not one person that I have spoken to that is not dreading the elections and the violence they believe it will bring. Youth Bases are already visibly being established at local community level around the country and it is understood that some War Veteran associations are already mobilising for the elections. It was from these bases that much of the election violence in 2008 was carried out. The presence of these bases strikes fear into individuals and communities and this may make it possible for political parties to “harvest” the fear created in 2008. So it may not be necessary to resort to overt violence – “Toy-Toying” may be enough. Having said that, with unemployment and poverty still high, and especially amongst the youth, generating violence is very cheap. As a member of the MDC put it: “A scud (local beer) costs fifty cents, so twenty dollars can go a long way, especially if you have impunity.” 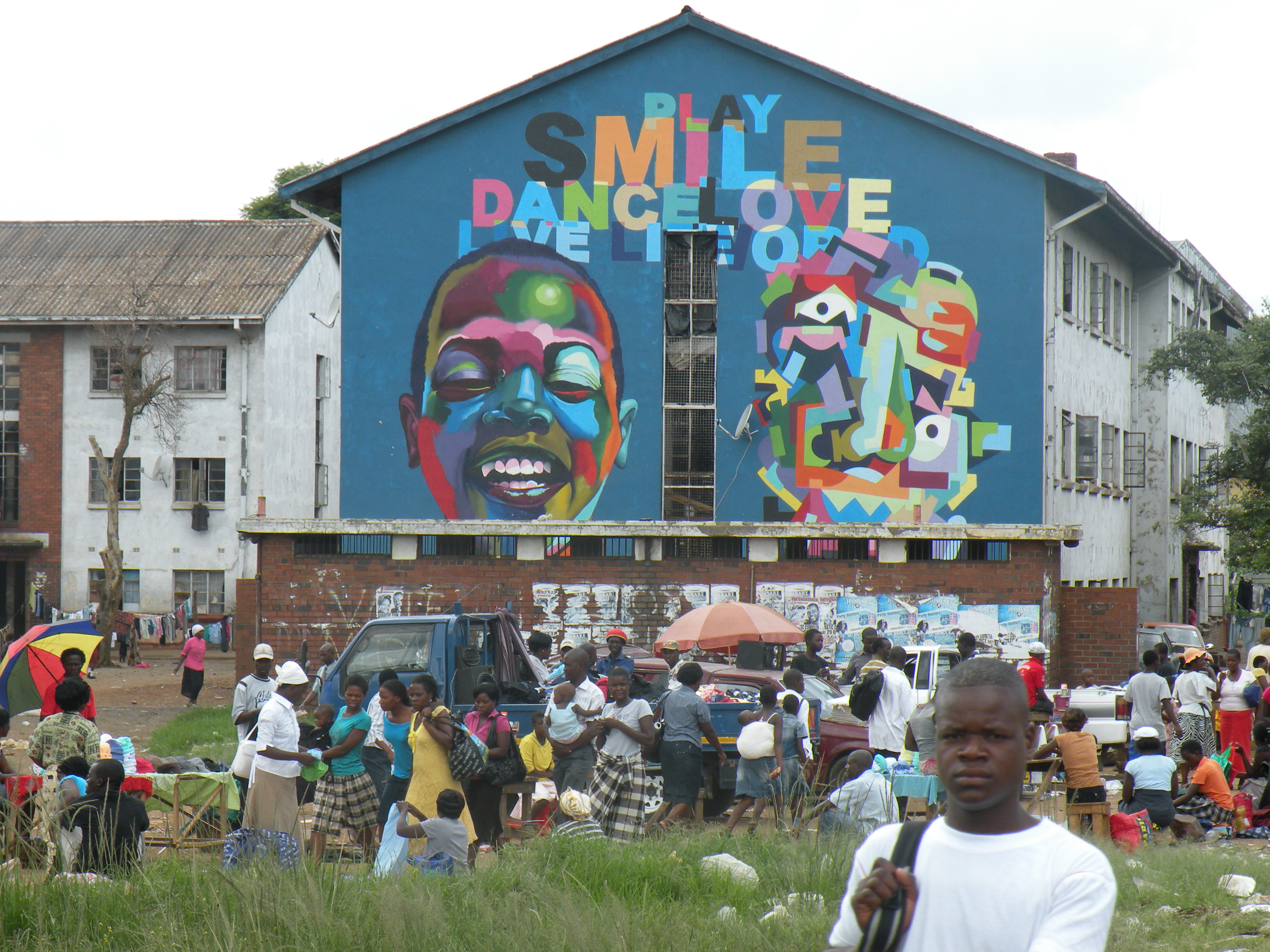 Normal life in Mbare township, Harare. This is one of the most tense constituencies at election time in the country. Photo by Eldridge Adolfo.

This leaves the country in a very awkward situation in that neither the political parties, civil society, the business community nor the ordinary people want to have elections. It prompts the question of whether elections are actually the way out of this stalemate – especially if elections simply act as a catalyst for increased election violence and instability, which, in any case, reproduces the status quo. What are the alternatives? A GNUII? There are many problems with the current GNU that are mostly generated from the political parties in Zimbabwe and Zanu PF in particular. However, because the GNU is not truly supported by the international community – who are solely focused on removing Zanu PF from power and have thus retained sanctions on the country – the MDC has been thrust into the GNU that has loaded it with lots of responsibility, but given it absolutely no power or resources (from neither the Zimbabwean state nor the international community), to do anything about those responsibilities. This has sorely exposed the MDC and has not created a platform to initiate the necessary reforms which would have prepared the country for elections.

Conversely, if elections do go ahead, and the MDC win those elections, and the MDC is in fact allowed to take control of the state, there is every possibility that the MDC would behave exactly the same as Zanu PF has: simply because they can. Zimbabwe’s problems are structural and are centred on the governance mechanisms of the state. For example, the “Imperial Presidency” in Zimbabwe means that the president is not accountable to anyone and can thus do whatever he/she wants to. Power is concentrated in the office of the presidency and even President Mugabe has recently said that “parliament is merely a decoration.” The reality is that the executive negotiates legislation, parliament simply rubber stamps it and the judiciary dares not go against it. Power needs to be diffused from this imperial office and shared with the Parliament, Senate and Judiciary, so as to counter balance this centralised power which will increase forms of accountability. Power also needs to be decentralised to allow other provincial state apparatus to exercise some power at the local level. This also applies to the electoral system that needs to be more inclusive. The first-past-the-post electoral system has been divisive and makes millions of votes worthless in Zimbabwe. An inclusive system does not necessarily have to be a strict Proportional Representation system, which may not by itself suite the Zimbabwean context. A mixed system will probably need to be explored.

Issues surrounding sanctions are likely to sustain the deadlock in the GNU and the international community will have to re-think the effectiveness of sanctions. With the international community focusing exclusively on humanitarian support in Zimbabwe, it is ignoring the greater complexities surrounding the socio-economic challenges faced by ordinary Zimbabwean people who are the most affected by sanctions. This is strengthening Zanu PF’s rhetoric that accuses the MDC of asking for sanctions to be imposed on the country and it is in-fact gaining support for Zanu PF in some quarters – which is somewhat counterproductive. While the people suffer, the politicians and their associates are profiting from the sale of diamonds (often illegally), mined in the eastern part of the country. It is claimed that between 2010 and 2012, over US$2 billion dollars’ worth of diamonds sales were made but were not passed through the Ministry of Finance or the Zimbabwean Treasury.

President Jacob Zuma of South Africa has taken the strategic step of moving the responsibility for the mediation efforts on Zimbabwe away from South Africa as a country and into SADC as a regional organisation. This has gained buy-in from the SADC countries which has seen some of President Mugabe’s supporters take a firm stance against him and Zanu PF. The leniency of the Mbeki Mediation era has somewhat subsided and Zanu PF understands that it needs to tread carefully and make certain it remains legitimate in the eyes of SADC and the African Union. Maybe a solution could be found through these organisations?