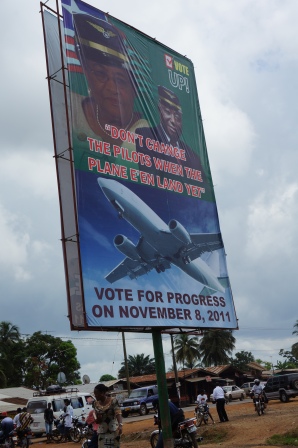 Most CDC supporters followed the recommendation of their party leader and restrained from voting on November 8. The election results show this with all clarity. After counting all the votes  NEC  showed that Johnson Sirleaf and the Unity Party had received more than 90%. Johnson Sirleaf has declared that she wants an inclusive government working for national unity, and there is clearly a need for this after the election period laying bare such cracks of conflict. Socio-political cracks are twofold: first between different regions within the country, and secondly between those who have and those who have not. These rifts are not new, but where rather central tenets of the civil war as well. For long term stability the Liberian government must in a comprehensive way deal with these issues – something that the UP has during their last period in office by and large failed to do. A further problem appears to be a centralisation of power to the UP. In fact they managed to “buy” up most of the smaller parties, with supporters and all, after the first round, and made deep inroads in the CDC opposition. This appears to be an obstacle for real democratic transition, and critical voices in Monrovia have started talking about the return of the one party state.

Last week I had a longer talk with an expat in the business community. The person has spent much of the last fifteen years in the country and knows both war and peacetime Liberia extremely well. Here are some basic ideas from our chat and some additional observations made be me:

Security. The security situation particularly in Monrovia is of great concern. Currently the security apparatus has less control of the situation than during the years under the Taylor government. The root according to him is extensive poverty where crime of various kinds to many is a way to get by; simply surviving. At present time it is important to underscore that it is far from ex-combatants only who are involved in urban crime. The situation is better in other parts of the country, but in Grand Gedeh there are serious security concerns after armed elements have returned from the unrest in Côte d’Ivoire. It should however be recalled that for some citizens hailing from the Liberian south-east the security provided during the time of Taylor was precarious to the extent that many were not safe travelling in large parts of the country.

Big Men and informal networks. This is a special interest of mine. I have edited a book on the topic, African onflicts and informal power, that will be published by Zed Press early next year. In relation to Anders Themnér’s and my project on former mid-level commanders I will write more about that, but from my discussion with the expat businessman I have a few notes on the politico-economic climate in Monrovia regarding the elections. Around government and ministers there are a number of networks that must be considered in order to make business. This is intimately linking business and politics. In order to be successful you must be part of Johnson Sirleaf’s people. Corruption is still a central concern and in most cases payment under the table is necessary (see below) – it is in many ways the glue of the informal networks. There are still some wealthy businessmen with money originating from the days of Charles Taylor; the Lonestar telecommunication company is the largest. This group of people made their money during the war and under Taylor’s presidency and today have a fragile truce with the UP government. One of the wealthiest Cyril Allen, former chairman of the NPP, did greatly upset Johnson Sirleaf, by sponsoring the CDC election campaign. Allegedly Johnson Sirleaf had promised to help lift his travel ban in case he would support her. Some other pro-Taylor politicians chose to stand as independents in this election (most importantly Daniel Chea and Edwin Snowe – the latter with the formidable slogan “it will Snow”), a sign of their willingness to shift to UP. Taylor’s old party NPP, lead by his wife Jewel Taylor, threw its lot behind CDC in the second round, but my guess is that in a longer perspective many more of the Taylor crowd, his “pepper bush”, will appear on the UP side once Taylor is sentenced by the Special Court for Sierra Leone and his loyalists are ascertained that he will not reappear in Liberia. If he on the other hand will be released, political power will be shifted back to him (and he is still very popular among the people) and some of the assets and profits from within the Taylor business sphere will be awarded Taylor. 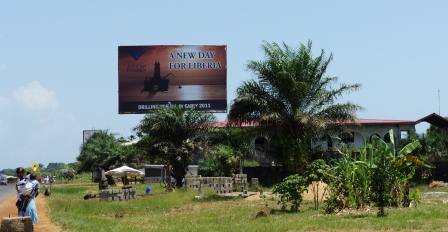 Natural resource boom. There is currently a big interest in natural resources and Liberia has the potential of becoming a very wealthy country if they are exploited in a good way. Liberia has however always been plagued by informal deals with big international companies, government officials and a variety of brokers receiving extraordinary profitable deals and money under the table. During the time of the utterly corrupt interim government under Gyude Bryant Liberia started auctioning predominantly off-shore oil concessions (but also one on-shore). A global witness report has unravelled several cases of corruption, and observers with good insights in the business points out that contracts signed with the current government is given much lower income to the government than is normal in the business (the recent deal with Chevron and a Nigerian company has supposedly given Chevron 70% and the Nigerian company 30% of incomes, whilst Liberia is totally left out. In regular contracts the government should receive 20-30% – but now the only income they will get if oil is eventually pumped up is from tax). Similar contracts with much too limited incomes for the government is signed in all sectors of the natural resource market suggesting that government officials involved in signing such contacts are in the receiving end of considerable bribes.

Problems in the bank sector. The Government of Liberia has signalled their interest in boosting the business sector, but this appears to be true only for large companies. In the mean time it is almost impossible for mid-size business to obtain bank loans in Liberia. Even though companies can put land and property as security Liberian banks typically refuses to give out loans. Instead these companies are approached by bank employees informally offering private loans on short term basis. You can receive 2000 USD from a bank employee on a ten days basis and having to pay back 2500. This is seriously hampering the possibilities for smaller companies who are not part of the government “circle”. On the other hand people within this circle can get loans even without any form of security.

Son of the President. Robert Sirleaf is allegedly increasingly involved in all sectors of natural resource extraction (but also demanding bribes from smaller companies). It is believed by some that most large scale deals are brokered by him. He was for instance involved in the recent oil deal with Chevron. Although it should also be acknowledged that Robert Sirleaf is involved in many community development projects, it is interesting to note how yet another son of the President is reaching notoriety. Charles Taylor’s son Chuckie led the feared ATU unit during his father’s presidency and a few years ago he was sentenced to 97 years in US prison for among other things severe torture committed in Liberia. Although economic crime and torture is not the same, crime is crime is crime, as Maggie Thatcher once said.