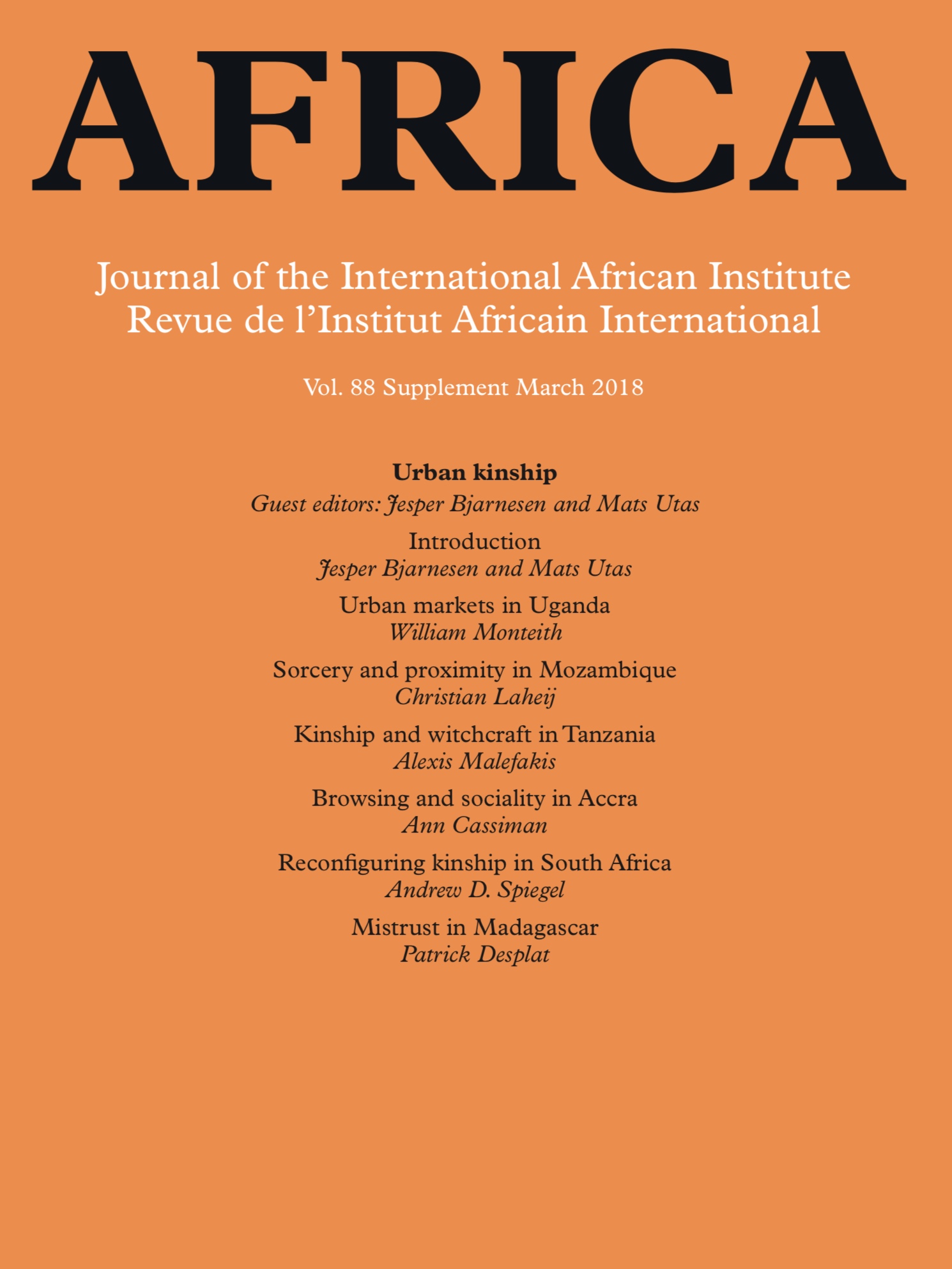 It is our pleasure and privilege to introduce a special issue of Africa, exploring the micro-politics of proximity and relatedness in six African cities. To understand how social and spatial proximity affects the dynamics of everyday sociality, we suggest the notion of urban kinship to capture how idioms of relatedness in the city build on more enduring socio-cultural legacies, often explicitly articulated in the language of family. Kinship ties are often thought to be naturally given, both in the sense of being biologically rooted in descent and in the sense of being inevitable as social ties. But kinship ties are indeed negotiable and require active work, in terms of their implications for the reproduction of relatedness as well as in their nominal orders.

One feature shared by all contributions to the special issue is precisely that they demonstrate how the forms and meanings of kinship and kinship-like ties are produced and reproduced in everyday life in African cities. Idioms of kinship are evoked in a myriad of different contexts and relationships, with significantly different implications. In some instances, these idioms may be seen as attempts to build or evoke ties that are not initially there; in others, they represent a redefinition of one relationship – a professional contact, an authority figure or a neighbour – into another; one of (social) kin.

It is no coincidence that many of our contributions focus on a younger generation of urban residents, since the generational challenges faced by young people in contemporary African cities are central to any study of urban sociality in such contexts. In the absence of predictable paths for social progression, young people may invest more in social ties to their peers than in ties to their extended family, reinforcing the kinship-like character of their friendships and peer group alliances.

So, what does it imply to vest a relationship in idioms of kinship? The ambivalence of kinship ties has been documented and analysed by generations of anthropologists but it is still worth emphasizing, given the persistence of a more classical and one-sided view of kinship. More than simply a close and loving bond between people, many of our contributors emphasize the darker sides of intimate relationships. The stakes of relatedness may be increased by a series of factors in the urban context: from migrant households dependent on the moral and financial support of their neighbours (Spiegel, Laheij), to transactional relationships where friendship and business intertwine (Cassiman, Malefakis, Monteith), and neighbourhood-based solidarity threatening to relapse into moral condemnation and social exclusion (Desplat, Laheij). Urban sociality in these cases is as culturally grounded and as socially complex as sociality anywhere else, but the density of residential areas and public spaces and the precarity of the lives of most of their inhabitants bring out the ambivalence of the micro-politics of proximity with particular clarity and force. Through these intimate engagements with urban residents in cities across the continent, we hope that this special issue will contribute to the growing literature on complex socialities in urban Africa and beyond, emphasizing the discourses, strategies and practices of urban residents themselves in their quests for existential continuity in the context of continuous transformation and flux.

Above is a short version of our introduction to this special issue. You will find the full length version here.