Thomas searches half-heartedly for the SIM card he discarded yesterday. He is exhausted. Worn out after three days of protests. He has only been home once to change his clothes since the beginning of the protests against President Nkurunziza’s decision to run for a third term, which was announced at the ruling party’s long-awaited congress on Saturday. Thomas is being watched. Sitting in his sofa in a modest but tidy room in Kamenge, a northern suburb of Bujumbura, Burundi’s capital, he seems to be running out of steam. He discarded the SIM card after receiving threatening phone calls. “We know what you are doing”, they said. “The next time you go out onto the street, you’d better bring flowers to honour the president, or else…”

His other SIM card is also known to his enemies. He has received messages with death threats in the past few days on that number. It has taken him by surprise that the authorities, or more likely the ruling party’s Imbonerakure youth militia, are following him so closely. On his way home to meet me, he was followed by three men. He had to call his friends in the neighbourhood, who came out to protect him. But so far he has decided to keep the second sim card working. After all, communicating through text and Whatsapp messages has been the backbone of the protests. The importance of these ways of communication is also known to the authorities and Whatsapp and Facebook were shut down on Tuesday afternoon, leaving the protesters to search for new means of coordination. Radios are shut down completely outside the capital and partially in Bujumbura. Most importantly, the private radio station Radio Publique Afrique (RPA), known in Burundi as “the voice of the people” and founded by one of the leading opposition leaders, Alexis Sinduhije of the MSD, was closed by the authorities on Monday. 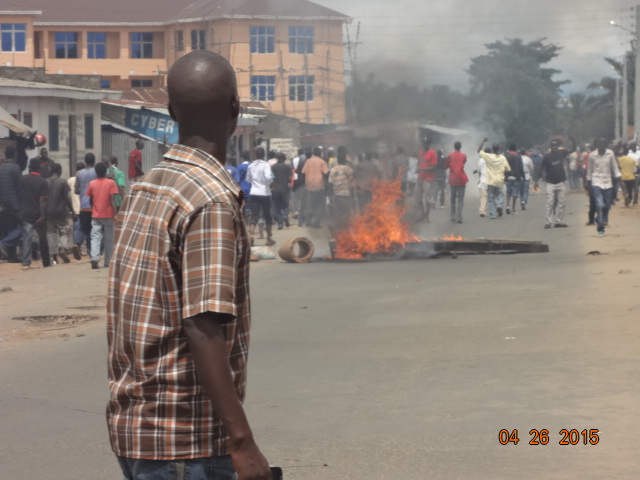 Protestors have set up burning perimeters to stop the police from advancing. Photo © by Jean-Marie Ntahimpera

For several months, the Burundian authorities have gradually stepped up the level of intimidation and harassment of their opposition, both within and outside the political parties. The ruling party’s congress on Saturday was expected by all sides to be a turning point in the build-up to the municipal, parliamentary, and presidential elections in May and June and the president did not fail to deliver. In accepting his party’s nomination for a third term in office, Pierre Nkurunziza is following through on the tendencies that most internal observers, including Thomas, have seen coming for a long time; those of subtle intimidation becoming increasingly brutal. For months, members of the ruling party’s youth wing, the Imbonerakure have been marching in the streets unarmed but nevertheless evoking the terror of the civil war through slogans and gestures. In one incident, the Imbonerakure marched in front of the RPA radio station, popping balloons to simulate gunshots. All subtle but unmistakable signs of the troubles to come.

Thomas’ friend, Patrice, has experienced far less subtle means of terror ever since he demobilised from the FNL rebel forces in 2005. Having refused an offer by his classmates at a technical college to join the Imbonerakure, he has been receiving death threats and dodged attempts at his life for years. Patrice and his wife had their first child in June last year and are scraping by on his wife’s petty trade and whatever he can earn on a day to day basis. He was kicked out of the technical college when his Imbonerakure class mates told their principal that Patrice remained loyal to the former FNL rebel leader Agathon Rwasa. Although Rwasa is formally running as an independent candidate for the presidential elections, many former rebels and FNL supporters still perceive him as their leader and answer to his calls. Rwasa initially urged his supporters not to participate in the protests but Patrice is hoping that he will become more involved. Patrice is even ready to take up arms if necessary: anything to rid the country of Pierre Nkurunziza once and for all. According to Patrice, and many other Burundians, the misery Nkurunziza’s regime has imposed on the growing numbers of citizens who oppose his ruling party has left people in destitution. “It is as if I am already dead”, he says with a blank stare.

An anatomy of public protests in Bujumbura

In the face of the oppressive regime of Nkurunziza’s CNDD-FDD, the prospect of the president extending his reign in the upcoming elections has provoked widespread protests, despite the official announcement that all forms of public gatherings are illegal, including jogging in groups. The Forum for Strengthening Civil Society (FORSC), actively opposing the third term of Nkurnziza, took the lead in calling for peaceful protests but after the dramatic arrest of human rights activist Jean-Claver Mbonimpa and the intimidation of several other civil society leaders, their role has been diminished. In their place, though, some leaders of the opposition were seen driving through crowds of cheering protestors on Wednesday, encouraging them to persist.

Peaceful protests are deemed by Thomas and other organisers at neighbourhood level to be the most efficient form of resistance. Citing examples of similar forms of civil resistance; from Gandhi to the Arab spring, to the popular uprising in Burkina Faso last October, Thomas is convinced that non-violence is the only viable option in the face of the overwhelming force of the authorities, and also the form most likely to be recognised and supported by the international community. The initial intention was to mobilise people from the suburbs surrounding the city and march towards the three central squares of the city centre. In Kamenge, which is a known stronghold of the opposition, Thomas expected to mobilise a significant force on Sunday. But the authorities were aware of the strategic importance of Kamenge and armed Imbonerakure, some allegedly trained in secrecy in the DRC, descended on the neighbourhood on the eve of the president’s announcement, leaving Thomas and his collaborators to scramble for new options. They decided to join the protestors in neighbouring Nyakabiga and in this way, the protests became concentrated in a few suburbs, against the intentions of the protestors and to the advantage of the authorities.

The intention of marching towards the city centre soon proved as untenable as city-wide mobilisation. The national police, most active in confronting the protestors, were waiting on all main junctions out of the suburbs and blocked their passage, shooting warning shots in the air and dispersing the crowds with tear gas but also killing six protestors in the first two days. During the first day of protests, Thomas realised two important things: firstly that the authorities had informers and other forms of surveillance on every street corner and, secondly, that they would stand a better chance of confronting the police on their own turf, in the suburbs, rather than in the city centre. 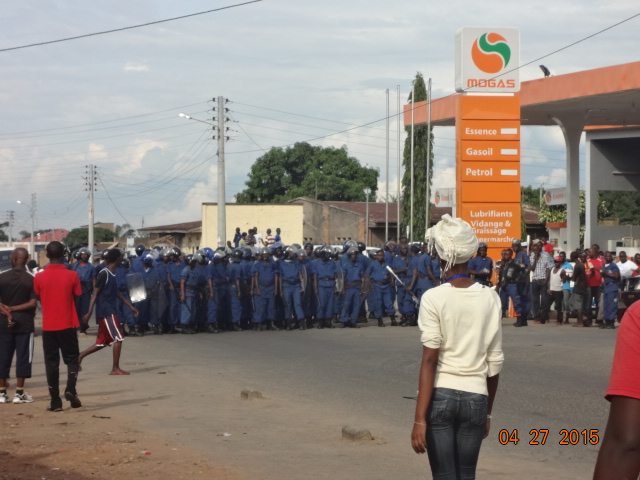 The riot police block protestors from advancing towards the city centre. Photo © by Jean-Marie Ntahimpera.

The front lines of Bujumbura’s public protests thus took shape during its first days, with mornings marked by gradually increasing numbers of protestors confronting lines of police in riot gear and afternoons eerily calm, as both protestors and police forces retreated to regroup and prepare for the following day. On Monday, the national army also appeared on the streets of Bujumbura, rarely intervening, but their presence was interpreted by many protesters as a signal that excessive force by the riot police would not be tolerated.

Wherever I meet youth party representatives involved in the organisation of the public protests, hoarse voices worn by shouting slogans and inhaling tear gas speak in unison about the injustices being committed by their president and his inner circle in the CNDD-FDD. These young men, predominantly urban youths living in Bujumbura’s poorest neighbourhoods and victims of years of marginalisation and systematic persecution, crave a genuinely participatory political system and a respect of the Constitution and the Arusha peace agreement. They accuse the ruling party elite of using all possible means to weaken the opposition at all levels. They hear the riot police appealing to Hutu protestors, saying that they are risking their lives for a Tutsi cause. The protestors unanimously see this ethnic division as a defunct logic of an older generation of power holders. As the lethal politics that plagued their childhoods and caused the demise of many of their parents. This logic no longer holds. Ethnicity has lost its currency as a political tool in the brief space of a decade but the youths do fear the lengths that the regime will go to in its attempt to re-ethnicise the political landscape. Rwandan mercenaries have already been apprehended in their neighbourhoods: the dreaded FNLR and Interahamwe youth militias who perpetrated the Rwandan genocide have been witnessed on the streets wearing Burundian police uniforms, suggesting their active collaboration with the Nkurunziza regime. 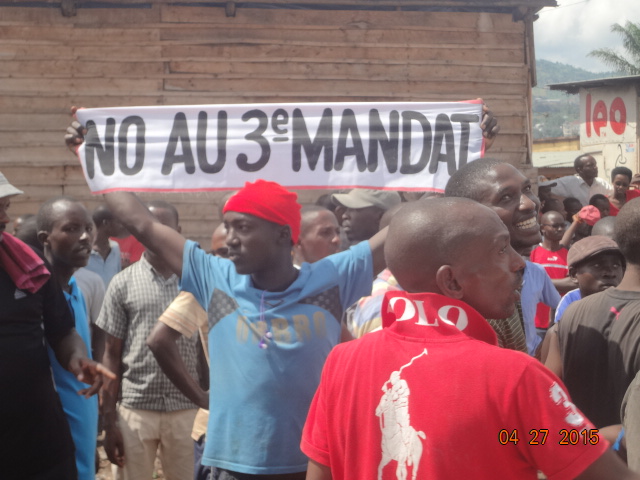 Léo, a passionate university teacher who prides himself of being an external observer of party politics, insists that the principle of respecting the Constitution is worth fighting for. Worth risking your life or your freedom for. He and his peers in Ngagara, a middle class neighbourhood known to be predominantly Tutsi have specific and long-term visions of how to engage with their elected officials at the municipal level in order to achieve changes and improvements in the neighbourhood, but these plans are worthless if the regime is allowed to continue a rule of lawlessness and impunity. Léo, contrary to Patrice, feels that he has much to lose in confronting the authorities on the streets of Bujumbura but he remains just as compelled to continue the protest, at any cost.

In this way, Thomas, a politically active Hutu youth with modest means; Patrice, a destitute Hutu ex-combatant; and Léo, a well-educated middleclass Tutsi university teacher, are facing the excessive force of president Nkurunziza’s authoritarian regime together as you read these lines. Although not as emblematic as the mass gatherings on Tahrir square, or Burkina Faso’s Place de la révolution, the struggle of Bujumbura’s protestors carries a profound symbolic weight for the future of a new generation of politically aware and socially capable urban youths, ready to risk their lives for fundamental democratic principles that have only recently been introduced in their country.

My interlocutors asked one and the same thing of me, as they spoke to me in the calm of the afternoons after mornings of battle and nights of vigilance under the threat of the targeted harassments of the Imbonerakure youth militias. They asked me to relay their hope for external intervention to whomever might listen…

Jesper Bjarnesen is senior researcher at the Nordic Africa Institute. He has worked primarily on mobility and intergenerational relations in urban Burkina Faso and Côte d’Ivoire. Other research interests include political transitions in Guinea-Conakry and African immigration to the European Union. Since 2014 he has been a member of a research project on The Micro-Level Dynamics of Electoral Violence in Sub-Saharan Africa, which follows the current electoral process in Burundi.

« “Afrophobia”? “Xenophobia”? “Black on black racism”? on phobic violence in South Africa, by Achille Mbembe Brinkmanship in Bujumbura: a struggle for power at all costs? by Mimmi Söderberg Kovacs »