On Saturday 25 April, the ruling party in Burundi, the CNDD-FDD (The National Council for the Defense of Democracy–Forces for the Defense of Democracy) – a formerly armed group turned political party after the end of the civil war – held its much awaited party congress at the party headquarters in the capital of Bujumbura. As widely anticipated, the party officially designated the sitting President Pierre Nkurunziza as their presidential candidate in the upcoming elections on 26 June this year. The announcement became the triggering event for the escalation of protests and demonstrations in several suburbs surrounding the city center [for more on the street protests see blog post by Jesper Bjarnesen here]. During the week that followed, similar protests were reported from other urban centers in the country too. A coalition of civil society organisations officially took the lead in organising the post-announcement protests, but in cooperation with several political parties in opposition. The ruling party responded heavy-handedly by closing down several radio stations, blocking social media networks, and banning participation in the protests. In the last few days, tensions have increased and violence escalated between the protesters and the police. 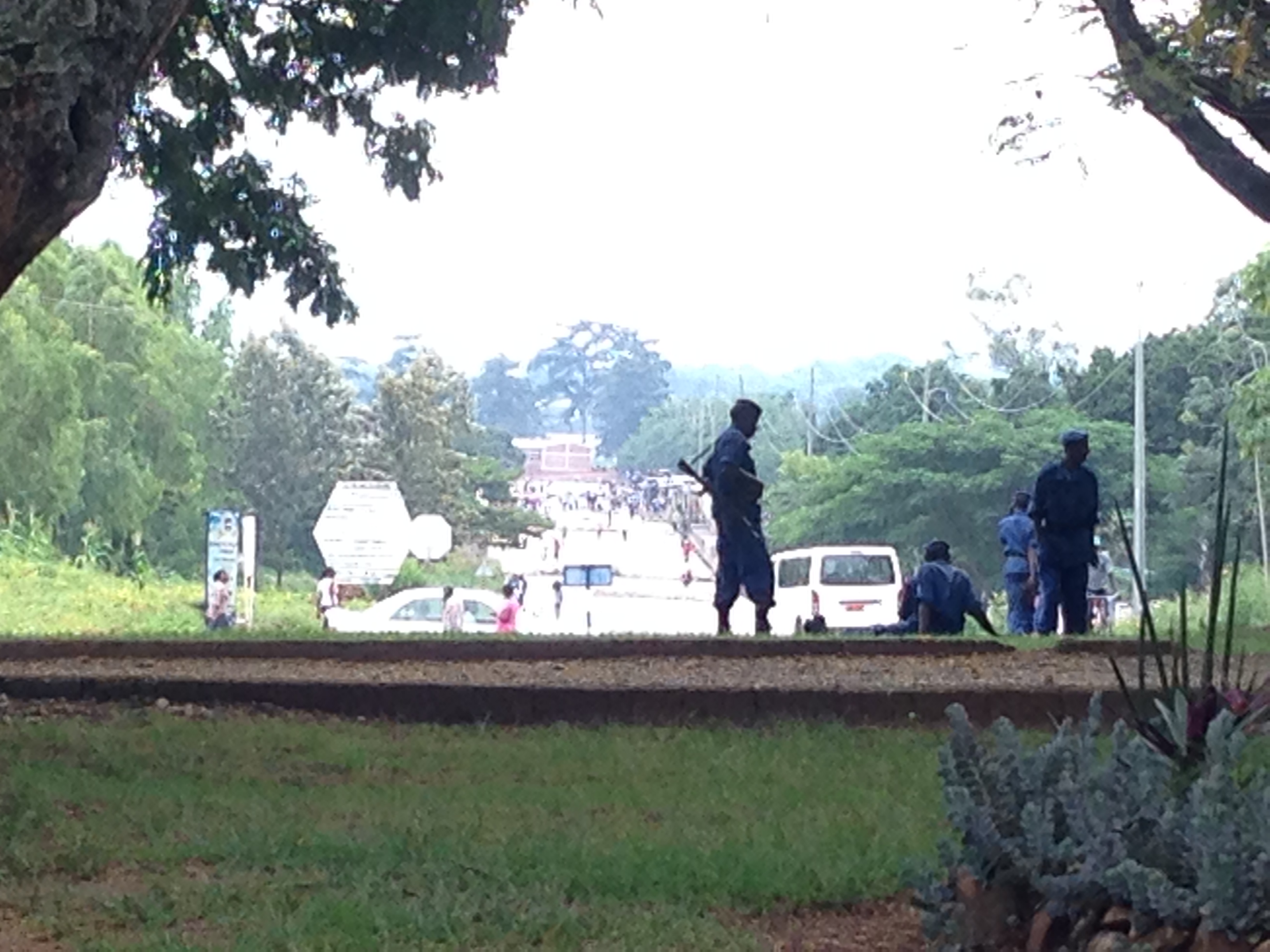 Since Saturday 25 April there are police at each street corner of Bujumbura and roadblocks at each entry point to the city center. Photo: Mimmi Söderberg Kovacs

While the scale and form of the current protests are new, the issue of the third term has been the issue of much debate in the country for some time. The Burundian constitution limits the mandate of the President to two five-year terms, but the ruling party has argued that Nkurunziza’s first term in office – which followed after the first post-war elections in 2005 – should not be counted, as he was not elected in direct elections. His critics however, dismiss the argument as semantics, pointing to the fact that he was elected unanimously by the parliament as the leader of the party with the majority of votes in the elections for the national assembly.

The so-called third term controversy is however only the tip of the iceberg, and is symbolic of much larger issues at stake in Burundian politics. Across several sections of society, people have expressed their growing disapproval to corruption by state officials and widespread human rights abuses. The last couple of years have also seen a range of attempts by the ruling party to consolidate its own grip on power, including attempts to amend the 2005 constitution, which builds on the principles laid down in the Arusha Peace accords for the purpose of ending the civil war and ensuring political pluralism and multiethnic rule in the country.

Critics of the CNDD-FDD also argue that the regime has recently tried to (re) introduce what one civil society representative referred to as “the ethnic twist” in an effort to split the political opposition. According to this line of argument, the President and other members of the ruling party have carefully but purposefully attempted to revitalize consciousness of ethnicity in the country, making reference to previous episodes of violent ethnic conflict between ethnic Hutus and Tutsis. While most every ordinary Burundian appears to dismiss all statements that try to portray the current conflict in ethnic terms as out of touch with realities on the ground and regards any attempt to politicize ethnicity as a cheap political trick, it is undoubtedly a labeling game with extremely dangerous implications in a situation of escalating insecurity. The number of people who have fled to neighboring countries, particularly to Rwanda, in the last month was on 28 April estimated at 21 000 according to the UNHCR, with the numbers going up every day. Most of these are allegedly ethnic Tutsis, who report of intensified political intimidation by the ruling party’s youth militia known as Imbonerakure. The rumor on the street also talks about a ten-fold raise in passport applications. During the demonstrations, eyewitnesses report that the police tried to evoke the ethnic card by asking protesters why they were risking their lives for a Tutsi cause. 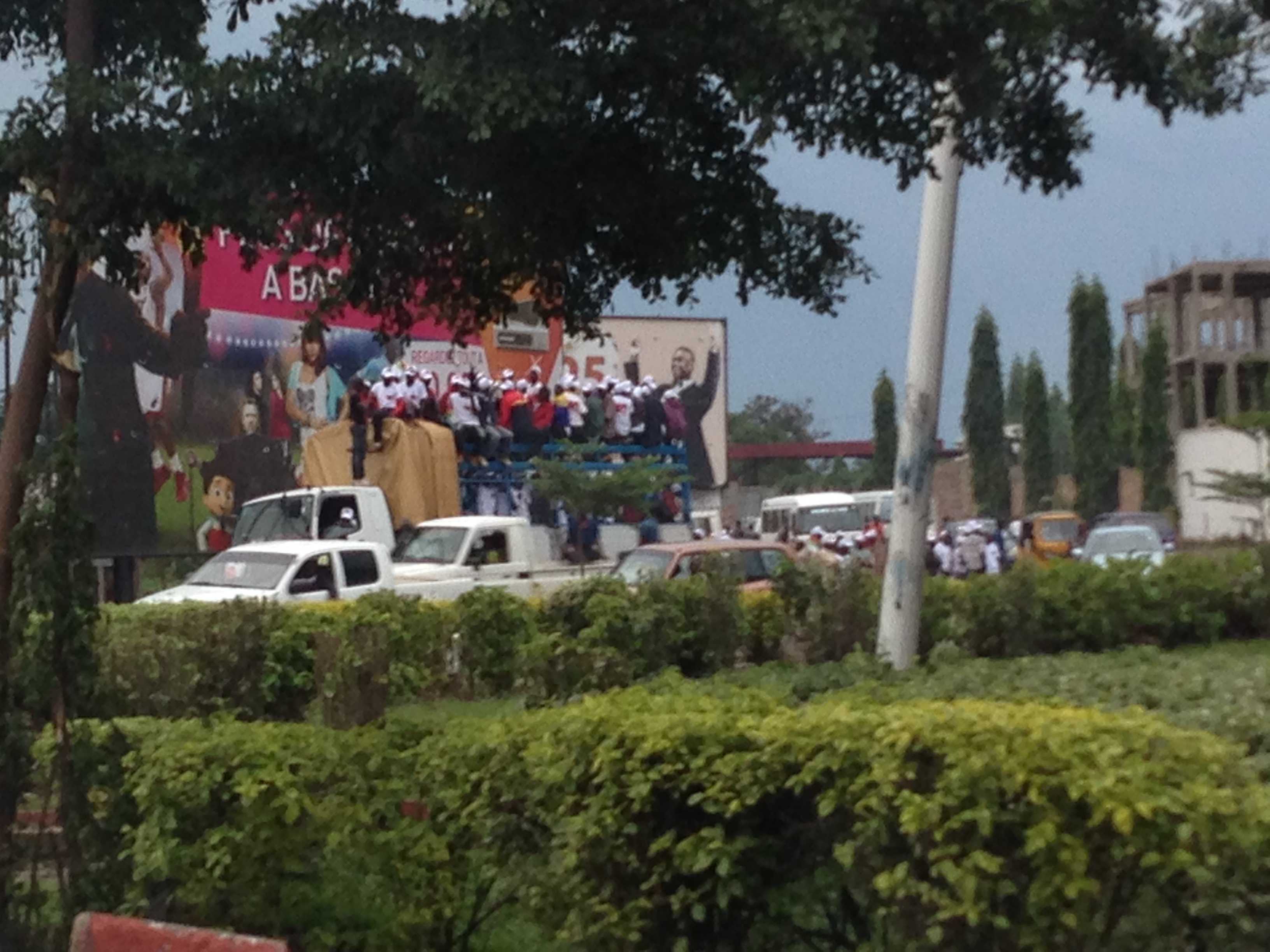 It may be precisely because of the broad-based ethnic heterogeneity of the opposition against its rule that the government is venturing down this road, for the purpose of sowing seeds of suspicion and distrust among its critics, in a classical attempt to divide and rule. One of the opposition coalitions is an electoral alliance between FNL – The National Forces of Liberation, a former Hutu armed group turned political party – and UPRONA – the Union for National Progress, a former ruling Tutsi party. While the latest Afrobarometer report from January this year suggests that the CNDD-FDD still retain majority support in the country at large, it also showed that a joint front among all political opposition parties might pose an electoral challenge to the ruling party. The problem so far has been that the opposition suffers from its own internal competition and power struggles.

In addition, while the call for preventing a third term seems to serve as an instrumental rallying point for unifying the opposition for a common cause, there are many question marks regarding their position beyond their joint call for Nkurunziza to step down. Primarily, the third term controversy has overshadowed the larger discussion about the elections. Domestic election observers from civil society have documented a large number of irregularities regarding the electoral process, several of which have been acknowledged by the Electoral Commission (CENI). The question is if the elections will be held at all under the current circumstances, and if so, if the opposition parties will accept to participate. If not, Burundi may very well face a scenario similar to that of the 2010 elections, when most opposition parties boycotted the elections, leaving CNDD-FDD free to dominate at the polls.

What may be different in 2015 is that the CNND-FDD leadership is also facing increasing resistance from within. The last year has seen several prominent people in the party – including the President’s former spokesman, the second Vice President, and the chairman of the National Assembly – express their opposition to Nkurunziza’s determination to stand for a third term. On 20 March this year, an open letter was published in which 17 high-ranking CNDD-FDD members made a public plea to the President to respect the Constitution. 10 of the signatories were subsequently dismissed from their positions. While the ruling party has long suffered from tensions between those former military commanders who fought in the civil war and people who joined the party from a civilian background, the recent rift seems to primarily run between a small cliques of people in the immediate circles around the President and the rest of the party membership, with many silent critics who fear the consequences of reprisals should they speak up. While the Constitutional Court recently ruled in favour of Nkurunziza’s candidacy, its vice President was later reported to have fled the country and cited to have received threats. The loyalty with the regime among the military has also been questioned, and many protesters have generally interpreted the presence of the army on the streets as a guarantor for their safety.

Perhaps the external pressure on president Nkurunziza to respect the constitutional rules of the game is also greater than previously. The Catholic Church, an influential institution in Burundi, has openly taken a stance against the regime. International and regional actors has likewise actively used their range of available diplomatic tools in both informal and formal settings to convince the government to change its political course, but so far without any results. On Wednesday 29 April, it was announced that President Obama would send an envoy, Assistant Secretary of State for Democracy, Human Rights and Labour, Tom Malinowski, to Burundi with a message to President Nkurunziza to respect both the constitution and the Arusha peace accords, an announcement that was well received on the streets of Bujumbura, but the visit appear to have made little difference in terms of the substance issues at stake.

While the people in general, and the political opposition in particular, appear to place their reliance on the international community to intervene and break the current dangerous brinkmanship, there are, however, few signs that the ruling party is about to change its course. On the contrary, there are plenty of indicators around to suggest that the regime may be willing to go to great length to remain in power. Already a year ago, reports by human rights activists emerged that the regime was training the youth militia of the party in secrecy across the border in eastern Congo. In March of this year, a UN report alleged that the regime was arming the Imbonerakure for the purpose of election intimidations. During the demonstrations, rumors have also surfaced that members of both the Interhambwe militia and the FDLR from Rwanda are working alongside the Police. Even if these allegations turn out to be exaggerated, the fear that such stories evoke creates its own dynamic, which may perhaps be equally powerful in achieving its objectives. Taken together, this suggests that the ruling party is neither willing nor interested in engaging in a peaceful dialogue with its critics. The question is, what would it take to break the current impasse before it is too late?

Mimmi Söderberg Kovacs is senior researcher at the Nordic Africa Institute. She has worked primarily on issues pertaining to conflict resolution and democratisation in post-war societies, including the transformation of armed actors into political parties. Since 2012, she is the project leader of research project funded by the Swedish Research Council on big man politics and electoral violence in Africa, in which the 2015 electoral process in Burundi constitutes one case study.