The current political situation in Burundi poses significant challenges for organizing credible elections in 2015. Thousands have fled to neighbouring Rwanda, the Democratic Republic of the Congo (DRC) and Tanzania. According to the Office of the United Nations High Commissioner for Refugees (UNHCR), what started as a trickle of a frightened few has grown into a swell of over 50,000 in a matter of weeks. After two weeks of demonstrations in Burundi’s capital, Bujumbura, the government decided to dismantle barricades that were blocking movement in the city’s outer neighbourhoods. The first thing to happen was a surge of 200 women marching into the city centre on Sunday, 10 May. Their non-violent protest almost made it to Independence Square. But not quite. They too were stopped. Many are. Well over a dozen people have been killed and hundreds injured in the political protests.

The previous posts on this blog have portrayed the unfolding of the violence in Bujumbura. Jesper Bjarnesen has recounted how Burundi’s young people set out on 26 April. Their intent to use non-violent strategies seemed irrelevant to the authorities, who have depicted the youth in the street as terrorists leading an insurrection. And as a response, the police have used rubber bullets, threats and intimidation to deter protestors. As Mimmi Söderberg Kovacs explained, the protests were organized to air objections to the 25 April decision by the ruling party, the CNDD-FDD (The National Council for the Defense of Democracy–Forces for the Defense of Democracy) to appoint current President Pierre Nkurunziza as its candidate for president. The problem is that while the CNDD-FDD views his candidacy as justifiable and even legitimate, many Burundians believe that it is illegitimate. Burundi’s blueprint for peace and democracy, the 2000 Arusha Peace and Reconciliation Agreement, was the starting point for negotiating an end to its 15-year civil war. It stipulates that an elected president can serve for no more than two terms. This means that ‘Peter’ (as many people in Bujumbura refer to the president) cannot contest the June 2015 elections. He was elected in 2005 for a first term, and re-elected in 2010. 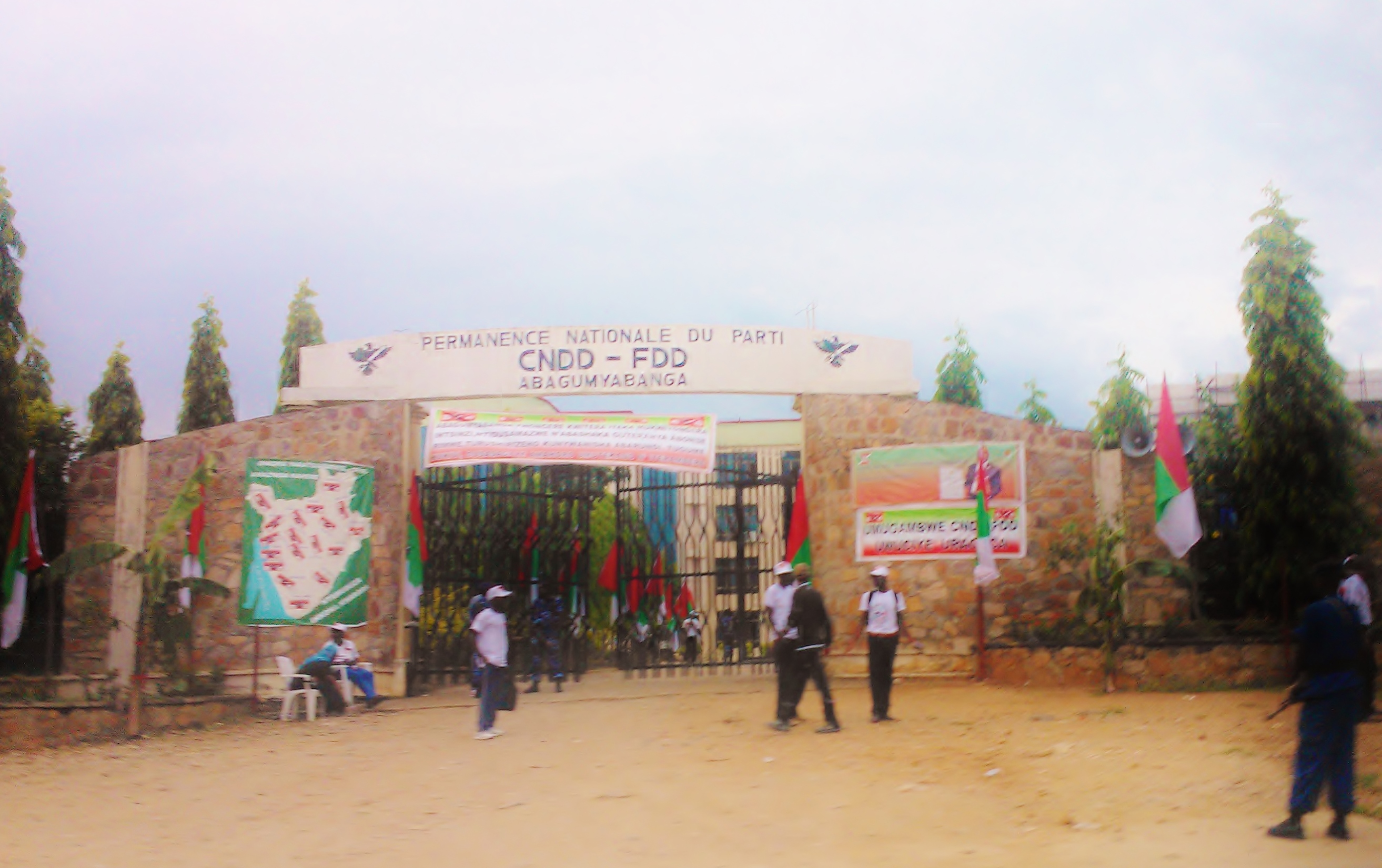 A third term, or not?

A CNDD-FDD party insider has explained to me that it is more complicated. Some key members within the party contend that the 2005 presidential term doesn’t count. Nkurunziza was indirectly elected by parliament. Article 96 of the constitution states that the president is elected by universal suffrage. In other words, he or she should be directly elected. Arguably, the 2005 presidential term was an ‘exception’. This, says the third-term proponents of the CNDD-FDD, means that Nkurunziza is actually serving his first term now, and therefore eligible to run again. They are so invested in this interpretation that Nkurunziza has never groomed a successor. In March 2014, the party proposed a bill that would have upended term limits, but it did not pass. Indeed, the third-termists of the CNDD-FDD have encountered a wall of objection to its Orwellian doublethink. They seem to say that a term, is a term, is a term.

Still, whether led by opposition politicians, civil society or marginalized and unemployed youth, the protests are not just about term limits. The protesters have support across ethnic, gender, class and other historical lines. The people, particularly of Bujumbura, do not consent to an all-encompassing party to rule them all.

Why do people say that the spirit of Arusha must be respected? Even if it has not always been praised by Burundians, the 2000 accord signifies the country’s turn toward a constitutional order for fair and representative government. It was the start of something new, and the third term agenda threatens that. In my own research, I have downplayed the accord’s relevance to facts on the ground. But having looked more closely, I see the agreement’s clauses as precursors to a democratic dispensation that would rid the country of minority rule. It is impossible to overemphasise that Burundi was fundamentally a divided and unequal society. It was governed by a Tutsi elite, which often projected its own internal power struggles onto the Hutu majority through institutionalized discrimination and repression.

And yet, Burundi appears to have broken with its past. Despite initial resistance to a negotiated settlement on the part of rebel groups, the Arusha agreement and its subsequent cease-fires and post-war developments have created a new Burundi that transcends ethnicity. The ruling party itself includes Tutsis and Hutus. Two old political party rivals, UPRONA (Union for National Progress) and the FNL (the National Liberation Front) have joined forces in coalition politics. Ex-combatants from each group cooperate in small-scale income generation projects. People have always inter-married, but now it seems to be even less problematic. Civil society members who share Nkurunziza’s ethnic background oppose his third-term. Tutsis and Hutus joke with me about their ethnicity when I tiptoe around it. They don’t care about that anymore. Burundians say that the problem of today is not ethnicity. The problem is the CNDD-FDD.

A party of five

From its inception in 1994, the CNDD-FDD was a heterogeneous organization. It began as a network of activists, intellectuals and Hutu military trainees from Burundi’s Higher Institute of Military Officers (ICSAM). It refused to sign the 2000 Arusha agreement, but in 2003 agreed to a settlement that was predicated on many of the guidelines and stipulations in the 2000 settlement. Importantly, the Arusha agreement placed elections as the final act of transformation from military dictatorship and war to peace and competitive democracy. With this transition, CNDD-FDD became the most powerful and popular political party in Burundi. But that popularity was in part, predicated on the diversity of views and personalities in its fold. In the years since Nkurunziza has served as president, CNDD-FDD has become less popular.

Perhaps because of its heterogeneity, the CNDD-FDD has always had a tough time maintaining internal unanimity. For example, the movement splintered in 1998 and 2001. Its most powerful party chairman, Hussein Radjabu (who some say ‘made’ Nkurunziza) was imprisoned in 2007 for alleged plotting against the state. Earlier this year, he escaped from prison and is in hiding. There has been costly tension between intellectuals who worked to raise the international profile of the movement during the civil war, and the military high-rankers who fought the war inside the country. The competition between the two groups has escalated. At the same time, there appears to be some difference of opinion within the military camp.

These faultlines appear to have deepened. On 17 March, a group of high-ranking ‘moderates’ within the party wrote a letter to Nkurunziza and asked him not to seek a third term mandate. They were subsequently expelled. In the weeks of protests, there were reports that members of the army seemed to seek to maintain civility between protesters and the police. It is speculated that of the two institutions, the police has a higher ratio of CNDD-FDD affiliates and ex-combatants. So, there is some difference of opinion within the party. However, people seem to believe that just five members (all generals) want to force the country to accept the third term. They say that power is concentrated in the hands of a few, and this is why dissent within the party is impossible. It is also why people at the grassroots level are afraid. I am told that everyone knows everyone in Burundi, and that you can be singled out for failing to support the party of five at the top. You can receive a phone call and a friendly reminder that your behaviour has been observed. You can be put on a list. Or you might be left out of opportunities for work. The pressure to comply need not always be overt. As a young man said to me, “the CNDD-FDD is a system, and it means everything”.

#We are not slaves

Perhaps the most threatening force on the ground is the Imbonerakure (those that see far), the militant youth wing of the CNDD-FDD. They are known to beat dissenters and harass bystanders. A community organizer that I know nearly spits when he describes Imbonerakure marching with their legs high in the air, singing, chanting and swaggering. But the party’s youth wing also controls some parts of the police. On 4 May, the vice president of the Constitutional Court, Sylvere Nimpagaritse, fled to Rwanda in order to avoid affirming the third term mandate. At the border, Imbonerakure ordered the police to stop him. A human rights expert, Pierre Claver Mbonimpa, alleged that the Imbonerakure were receiving military training inside the DRC. In February the UN Integrated Office in Burundi (BINUB) reported that hundreds of police and army uniforms and some arms had gone missing. But where there is smoke, there is fire and pictures have circulated on social media of men ‘switching’ into police uniforms. Meanwhile, the Imbonerakure leadership denies these allegations. But all this talk of an increasingly militant youth is not one-sided. The protestors have physical and digital gathering spaces, they use hashtags and slogans saying ‘we are not slaves’ and ‘they will go to the Hague’. It seems to be an answer to the organized threat of the CNDD-FDD and its Imbonerakure.

Has Burundi begun to implode? On 8 May, Nkurunziza officially registered his candidacy. He said that the refugee flows were not as drastic as during the civil war. He tried to reassure observers inside and outside the country that the majority of the country was calm and that people were going about their daily routines. This might be so. Nkurunziza is very popular in the rural parts of the country. Still, the actions of the government belie its reassurances. When the first days of protest began, government ministers stormed Radio Publique Africaine (RPA) in order to cut off its live broadcast. Other independent radio stations have been silenced. Opposition leaders say that this is a sign that the president is not really assured of his popularity in the countryside.

These leaders also call on the international community to intervene – particularly on the basis that the electoral situation does not constitute a level playing field. Perhaps the most prominent among them, Agathon Rwasa, argues that elections cannot be organized within the current climate of protest, irregularities and intimidation. The opposition has little faith in the National Electoral Commission, which has not always made it easy for them to participate. Undoubtedly, they will also point to the Constitutional Court’s ruling that Nkurunziza’s candidacy was constitutional as an illustration of the biases built into the system.

For the last year, an assortment of external actors have used quiet diplomacy and openly stated that the government should avoid the situation that exists today. In the last few days, the Belgium government has decided to suspend its continued financing of the elections, holding back 2 million euros of its support due to reports from European Union (EU) observers that the conditions do not exist for fair and equitable campaigning. (Belgium has also decided to hold back 5 million euros in aid to Burundi’s police.) In the region, the AU Commission Chairperson Nkosazana Dlamini-Zuma has been a vocal proponent of respecting the spirit of Arusha. The East African Community (EAC) will meet in Dar es Salaam on 13 May to discuss the crisis. But the story won’t end there. It is just beginning.

Angela Muvumba Sellström is a researcher at the Nordic Africa Institute (NAI) and the University of Uppsala’s Department of Peace and Conflict Research. She is a participant in a research project funded by the Swedish Research Council on big man politics and electoral violence in Africa, in which the 2015 electoral process in Burundi constitutes one case study. Her professional background includes 15 years of policy research experience on peace and security issues in Africa.  Her doctoral dissertation (Uppsala University, 2015) examined the causes of armed group impunity for sexual violence, focusing in part on Burundi.

« Brinkmanship in Bujumbura: a struggle for power at all costs? by Mimmi Söderberg Kovacs To have a coup or not to have a coup…. By Gudrun Sif Fridriksdottir  »