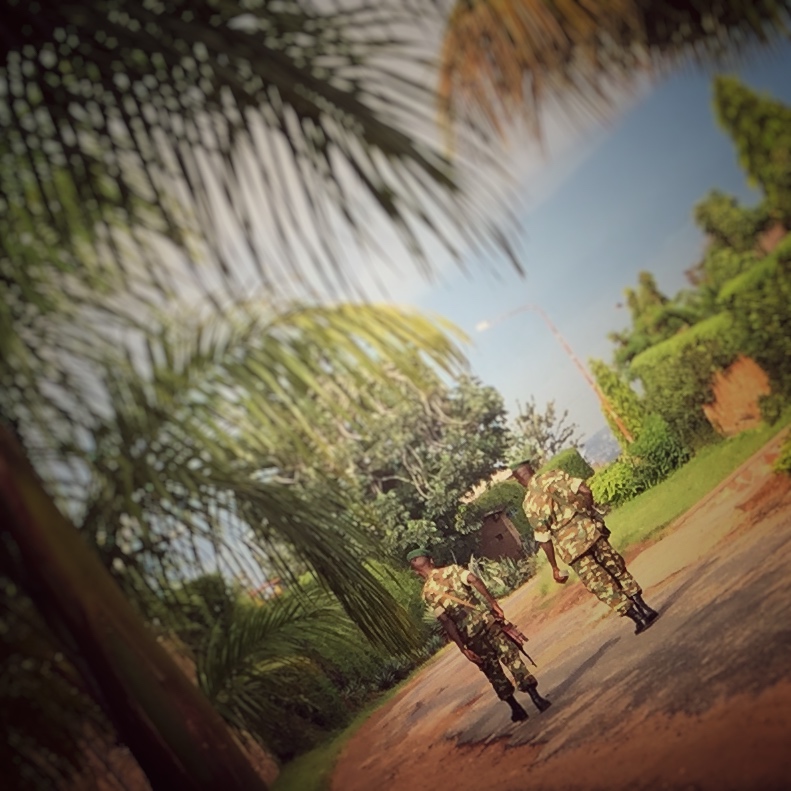 END_OF_DOCUMENT_TOKEN_TO_BE_REPLACED

“I miss dancing” a friend of mine says sometime in late June. “What?” I reply, thinking I must have misheard him. “I miss dancing”, he hesitates a bit “…and information [independent media]”. I can’t help laughing “Well one is very important for democracy, the other … not so much” I claim. But then again he has a point. At this stage Bujumbura has been in turmoil for almost two months, he lives in a turbulent neighbourhood, I don’t, but we are all already very tired. People just want their regular lives back, and being able to enjoy life, not just live it. Unfortunately this is not to happen in 2015. END_OF_DOCUMENT_TOKEN_TO_BE_REPLACED

Since April, Burundi’s capital of Bujumbura has been the scene of violent confrontations between security forces and civilian protesters who deplore president Pierre Nkurunziza’s candidacy in July‘s presidential elections. Both his candidacy and his overwhelming electoral victory have been denounced by the African Union, the European Union, the UN and a range of governments around the world but Nkurunziza has so far succeeded in calling the bluff of the international community and continuing his authoritarian leadership. For the past several months, assassinations have been reported on a regular basis, alongside reports of attacks against the security forces by, as of yet, unidentified armed actors opposing the regime. END_OF_DOCUMENT_TOKEN_TO_BE_REPLACED

Can you win a war on Facebook? By Simon Turner

Recently, I have been trying to keep up with the situation in Bujumbura, the capital city of Burundi in light of the protests and the violence. And while mainstream Western media only mention the situation sporadically, Burundians are busy on social media like Facebook and Twitter. I am struck by the amount of detail that is uploaded every day. It is as if every single arrest is documented, place, name and time recorded and spread through social media together with photos and video clips, recorded on smart phones. Not only do the updates seem to cover a lot of ground and document as many incidents as possible; they are also uploaded so fast that we almost can follow the events in real time – in front of our screens in our offices, on the train to work or at home. The various groups posting these pictures and updates such as ‘Journalistes Et Societé Civile En Danger De Mort Au Burundi’ appear thus to be pretty media savvy and up beat in the social media. The question then whether social media and mobile phones make a big difference. Is the present online, real-time coverage having an impact on the nature of the conflict? In order to answer this, let us go back in time and see how power, violence and media have played themselves out in Burundi’s tumultuous past. END_OF_DOCUMENT_TOKEN_TO_BE_REPLACED

Burundi: after the coup attempt, by Gudrun Sif Fridriksdottir

A month ago, on the 25th April the CNDD-FDD, the ruling party in Burundi, announced its presidential candidate for the upcoming elections scheduled for June 26. To nobody’s surprise the candidate was Pierre Nkurunziza, the current President who has already served for two terms. This decision was met with heavy protests in the streets of Bujumbura, also to nobody’s surprise. These were the two events that had been predicted and anticipated since long before my arrival in the country early this year. How things would evolve from there was anyone’s guess. But I feel like few people actually thought the protests would last this long, be this organised, and this determined. Now we have witnessed a month of protests, about 30 dead, hundreds injured. And on the 13th of this month there was the failed coup attempt. END_OF_DOCUMENT_TOKEN_TO_BE_REPLACED

This seems to currently be the question in Bujumbura, where uncertainty governs at the moment. This coup/non coup led by Major General Godefroid Niyombare is not coming out of nowhere but taking place after over two weeks of deadly protests that have shaken many neighbourhoods of the city and affected all its inhabitants in one way or the other. It’s been a difficult time. People look tired. The people taking active part in the protests must certainly be tired. But other people also look drained and sad, tired of the situation and uncertainty created since the ruling party, CNDD-FDD, announced President Nkurunziza as their candidate for the Presidential elections on April 25. This being a violation of the constitution according to his opponents. END_OF_DOCUMENT_TOKEN_TO_BE_REPLACED

The current political situation in Burundi poses significant challenges for organizing credible elections in 2015. Thousands have fled to neighbouring Rwanda, the Democratic Republic of the Congo (DRC) and Tanzania. According to the Office of the United Nations High Commissioner for Refugees (UNHCR), what started as a trickle of a frightened few has grown into a swell of over 50,000 in a matter of weeks. After two weeks of demonstrations in Burundi’s capital, Bujumbura, the government decided to dismantle barricades that were blocking movement in the city’s outer neighbourhoods. The first thing to happen was a surge of 200 women marching into the city centre on Sunday, 10 May. Their non-violent protest almost made it to Independence Square. But not quite. They too were stopped. Many are. Well over a dozen people have been killed and hundreds injured in the political protests. END_OF_DOCUMENT_TOKEN_TO_BE_REPLACED

On Saturday 25 April, the ruling party in Burundi, the CNDD-FDD (The National Council for the Defense of Democracy–Forces for the Defense of Democracy) – a formerly armed group turned political party after the end of the civil war – held its much awaited party congress at the party headquarters in the capital of Bujumbura. As widely anticipated, the party officially designated the sitting President Pierre Nkurunziza as their presidential candidate in the upcoming elections on 26 June this year. The announcement became the triggering event for the escalation of protests and demonstrations in several suburbs surrounding the city center [for more on the street protests see blog post by Jesper Bjarnesen here]. During the week that followed, similar protests were reported from other urban centers in the country too. A coalition of civil society organisations officially took the lead in organising the post-announcement protests, but in cooperation with several political parties in opposition. The ruling party responded heavy-handedly by closing down several radio stations, blocking social media networks, and banning participation in the protests. In the last few days, tensions have increased and violence escalated between the protesters and the police. END_OF_DOCUMENT_TOKEN_TO_BE_REPLACED

Thomas searches half-heartedly for the SIM card he discarded yesterday. He is exhausted. Worn out after three days of protests. He has only been home once to change his clothes since the beginning of the protests against President Nkurunziza’s decision to run for a third term, which was announced at the ruling party’s long-awaited congress on Saturday. Thomas is being watched. Sitting in his sofa in a modest but tidy room in Kamenge, a northern suburb of Bujumbura, Burundi’s capital, he seems to be running out of steam. He discarded the SIM card after receiving threatening phone calls. “We know what you are doing”, they said. “The next time you go out onto the street, you’d better bring flowers to honour the president, or else…” END_OF_DOCUMENT_TOKEN_TO_BE_REPLACED